One of my favorite iOS Jailbroken tweaks is Graviboard. Graviboard is a tweak that adds gravity-like behavior to the iOS Homescreen on your iPod Touch, iPhone and iPad.

I received an email at 4:13AM this morning from Conrad Kramer, the developer of Graviboard (Kramer Software Productions), that he submitted the iOS 6 supported version to Cydia.  Earlier this afternoon, it showed up in Cydia. 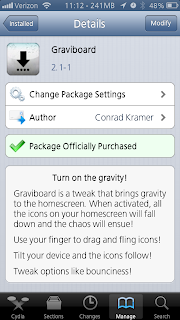 I have been waiting for this update since iOS 6 came out and had inquired with Conrad back on Mar 16, 2013 about supporting the newest operating system from Apple.

Whenever you return to the Homescreen, the icons and folders will react based on the settings that you have set up for Graviboard. 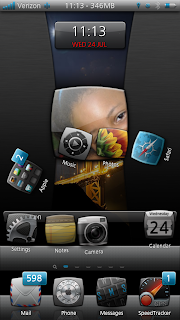 The behavior of the icons can be changed within Graviboard area within the normal iOS Settings app. 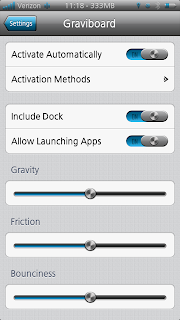 It is a very nice tweak that just adds a little fun to the iOS Homescreen.

If you have a few other tweaks installed on your iOS device, I recommend you wait a couple of days for Conrad or other developers to make the tweaks work together.

I also use Gridlock and had to disable it (through SBsetting - and people keep saying they can get away without using SBsettings) to have Graviboard work without rebooting the device.

In a couple of hour or days, Graviboard will be working nicely with the other popular Cydia Tweaks.


Update: Conrad did release the update within a few hours and now the tweak works just as advertised. This tweak always get a response from people that see it, "Wow, how do you make your icons explode like that when you turn your phone on?" is the question I get the most.
By Detroit Love - July 24, 2013 No comments: