Last month I emailed Tim Cook making what I called "an outrageous but doable request". I wrote, "Imagine turning on the Apple TV device and launching the podcast app and being able to live stream the event. I do!" Now I didn't think that the email would reach him. I thought the email would end up in a Spam folder. If it make it. I didn't imagine anything would be done so quickly if ever.

Here is the email I sent.

I know that Apple do not normally live stream the product announcements events, such as the one occurring tomorrow September 14, 2012, but I have an outrageous suggestion.

Please consider allowing us, the owners of an AppleTV device, to view a future announce event.  Wouldn't it be great to treat us to such a treat for being the faithful?

Imagine turning on the AppleTV device and launching the podcast app and being able to live stream the event. I do!

I know this request is unlikely to be received directly and even less probable for it to make it to you, but I believe this idea is something that is not only possible, but doable.

All impossible things become possible to become reality only after someone is willing to dream it is possible. Dream on. Thank you for your consideration.

One might say, it is coincidence, but it is highly unlikely.

I didn't get a chance to watch the event live because I never knew Mr. Cook acted on my request. He never responded to the email. In fact, I didn't know the event was streamed live until I was listening to the Mac OS on the Stitcher Radio app this morning. I sent the email because I thought that Apple would consider it. It only made sense. Apple loves that it customers are into their products.

Who more than the current customers (and the press of course) would be so interested in the live stream of the event. I figured it would do a few things. Once Apple might consider it because it could lead to more device sales as the press outlets could use it to get first hand accounts of the event even if they were not invited to the event.

If they don't own Apple products, they would in order to watch. Also, Apple fanatics could have "watch parties" and help spread the news in a very excited way. Why would Apple want this. You have to be in the "club" to watch, so it could lead to more sales and more Apple fanaticism. Lastly, it just made sense to me.

What would be the objection? Too much interest that a live stream would get overwhelmed  You wouldn't have the world tuning in and overloading the feed. You would stream it to the most likely people who are more effective than the press - the loyal Apple fans (customers).

Here are the screens (though not live) of how a streamed event would look on Apple TV. 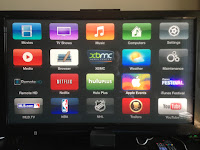 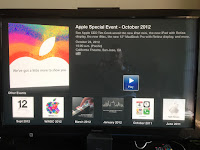 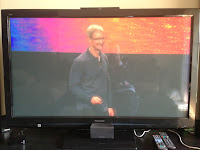