There are some things about the iPad that is indisputable:
1. People love it and almost every owner buys a case or cover to help protect it.
2. It has great resale value, so people try to keep it pristine.
3. The built in speaker sucks.
The Apple Smart cover is very popular. Many people have it because it is a neat product and it not very heavy. The thing people don't like about it is that it doesn't cover and protect the back. As a result many people, including myself have purchased a separate cover for the back of the iPad. Apple recently released a new Smart Case that covers the front as well as the back.  But what Apple's new Smart Case and the other product fail to address is sound issue that all iPad owners are aware of - the poor sound quality of the speaker.
It is not that the speaker sucks, but rather it sucks that the sound is projected away from your ears. The solution is so simple, that it amazes me that Apple didn't think of it for their own Smart Case. There is a KickStarter project that is looking for backer to help bring to market a fitted hard shell that protects the back of your iPad while amplifying the sound and directing that sound towards the holder instead of towards the floor or away from the listener.
It is a very simple change that quite frankly just makes sense. The hard shell protects the iPad, but also allows the Apple logo to be seen as well (a mistake most vendors forget to provide).

Backers can get this product for $20 which is less expensive than what I paid for my current shell that doesn't correct the sound issue and does not show the Apple logo. There are a limited number of slots available for $15 pledges, so you can save $5 if you act quickly.
This project has just a few days remaining and need more people to back it. If you like it, back it and spread the word so it can come to market. I am a backer. This project will only be funded if it has pledges of $12,250 or more by Monday, September 10, 2012. They are about $9000 short of their goal, so they need about 465 more backers.
Here is the project information.  Check out the video available on the project page: http://kck.st/MftJQR

The only fitted hard shell case that acoustically amplifies the sound from your iPad, and fits both the iPad 2 and 3! 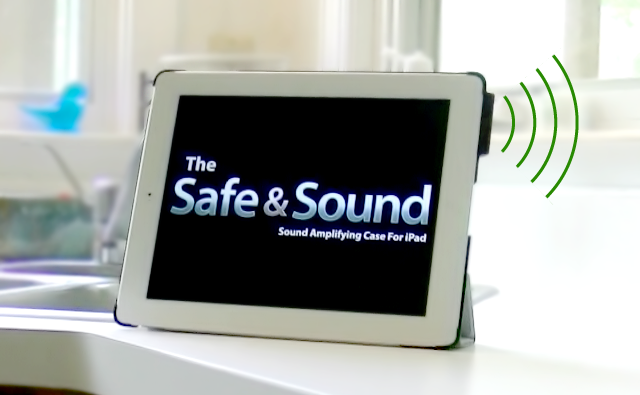 iMore.com - "[...] all generations of the iPad suffer from really low audio levels from the external speaker [...] hence the need for these types of devices."

iPadevice.com  calls the Safe & Sound inovative and practically limitless,"A complete and versatile accessory for all purposes, with another positive aspect: the price." (translated from original text using Google Translate)

ilifegeeks.com - "You can listen to music, play videos, make FaceTime calls and anything else for which you would [otherwise] require an external speaker for a louder volume."

What Is The Safe & Sound Case?

The Safe & Sound case for iPad is a dual purpose hard shell case offering both protection and acoustic amplification that feels more like an extension of your iPad than just another accessory. With the Safe & Sound case, your iPad is safer and sounds better, without losing any of its functionality, including the use of a smart cover. 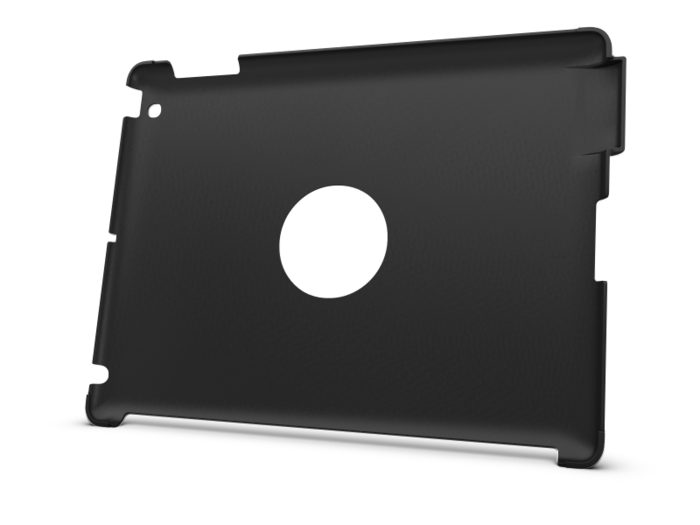 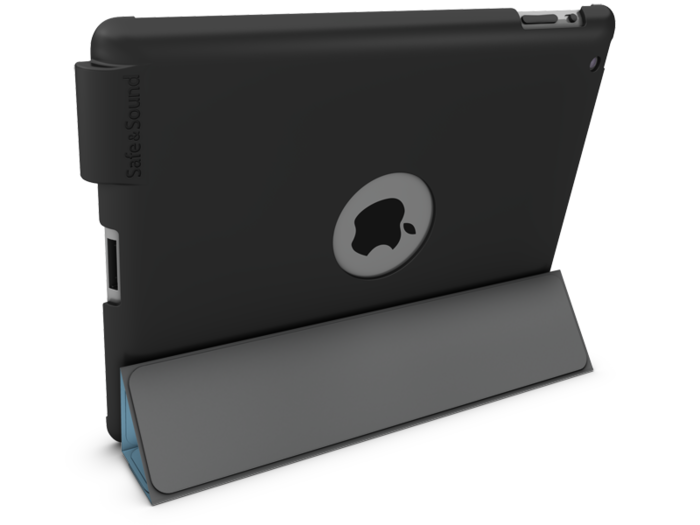 The key feature that makes the Safe & Sound case stand out is its acoustic sound box, which reflects sound waves back toward you off of a single smooth surface. This means that sound waves reach your ear with greater amplitude and little interference, resulting in clearer, louder audio, optimizing your iPad's built-in speaker.

Take a look at this video to see why your iPad needs the Safe & Sound case:

This video uses a sound meter to demonstrate how effective the Safe & Sound Case really is by comparing the same 10 seconds of a song, one with the Safe & Sound, and one without. The volume on both iPads is all the way up, and the audio levels of the video haven't been altered in any way.

You can clearly hear the difference in quality, and the sound meter confirms that the Safe & Sound boosts volume by as much as 5db.

The Safe & Sound case is made of a Polycarbonate/ABS plastic alloy, known for having greater flexural strength and impact resistance than standard ABS plastic, providing superior protection for your iPad. The Safe & Sound snaps onto your iPad by clipping around the front bevel of each corner, letting you take improved sound quality wherever you go. These clips sit slightly above the screen, meaning you can place your iPad face down on a flat surface without risking damage to the screen. Of course, the Safe & Sound case also allows the use of a smart cover. 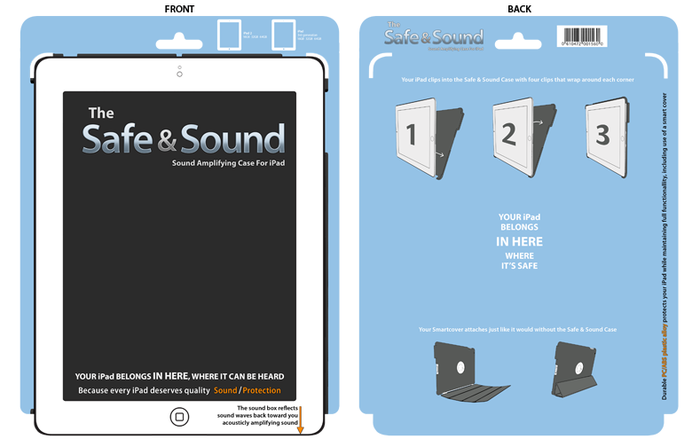 We've designed simple, sophisticated packaging that not only commands attention visually, but points out the case's key features in order to appeal to consumers. The Safe & Sound fits into the packaging the same way it fits onto your iPad, which is also demonstrated with a graphic explanation on the back.

Where Are We In The Process?

Currently, our injection molding manufacturer has our CAD files and color specs, and the order for printing and die-cutting of the retail packaging is queued up and ready. All we need now are order quantities and the funds to make it happen. As soon as we've received successful funding we're ready to hit the GO button and have the plastic parts manufactured, the packaging printed, and the two assembled and delivered sometime in December, just in time for the holidays.

How Kickstarters Will Impact The Project

Thank you for your support!

We've taken this project as far as we can on our own with the creation of our 3D printed prototype. The next step is to make the tools for injection molding and begin production.

Developing a product is an expensive process, and without help from the Kickstarter community, the Safe & Sound case will never be more than a prototype. Here are just a few things the money we raise will go toward:

Just by visiting this page and showing interest, you've helped to support the Safe & Sound case, but what we really need are backers. Every dollar helps push us closer to our goal of getting the Safe & Sound case out there on the shelves, and to show our appreciation for your support, we've designed six rewards with something for every level of backer.

Pledge now and become a part of making this world a little more safe and sound for iPads everywhere. 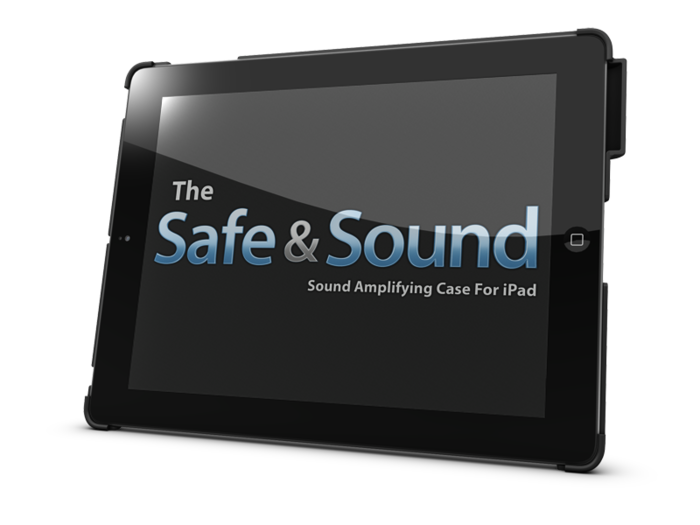 If this project makes sense to you then back it so it can come to market.