It was one of the more successful Kickstarter campaigns, lauded by everyone from CNET to TIME and bringing in over $700,000 over their initial goal. 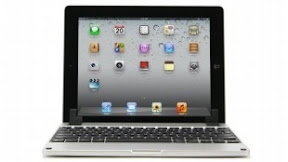 The Brydge team promised to turn your iPad into a "laptop" using anodized aluminum keyboard and an elegant "hinge". Its durability proven by a "shake test" captured on video, the patent-pending hinge boasted 180 degrees of positioning and promised to revolutionize the iPad: "When paired together Brydge and your iPad appear to be two parts of the same device, blending style and functionality seamlessly. Unlike other products made of painted plastic in an effort to look similar to the iPad, Brydge does not fake it. Not only does it look good, but when held in your hands you can feel the quality craftsmanship Apple lovers demand."
And then, some time after the Kickstarter ended, the following update was emailed to backers:
Hi Everyone,
Exciting progress is being made over here at Brydge HQ. As we mentioned last update, we have now officially completely redesigned the hinge, and we think you will be as happy with the results as we are. We redesigned the hinge for several important reasons, but before getting into that, here is how the new hinge looks compared to the old hinge:
New Hinge Design (plastic) 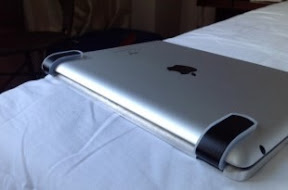 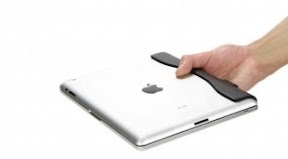 This change in design did not, apparently, go well with some of the backers. Here's a sample of the comments left on Brydge's Kickstarter in response to the "New Look":
"I think the original design looked a lot better. The new hinges look incredible FAT. I need to be able to attach and detach this keyboard easily & frequently and this new design does not look like it can do that the way the old design did. If you are doing it because it's cheaper or because it MAY be compatible with some future iPad Apple is sure to completely redesign. Please go back to the original design"
"Agree - hate new design and it's frankly very ugly. I want to cancel my pledge!"
"I'm sorry to say so, and it's not like you can do anything about it, but the new design is bad. It's not elegant, not clean but just bad. It looks like a DIY kit."
"Design of this hinge is terrible! Decided to purchase because the first wonderful design. You want to cancel if you change the design at this stage."
"I am afraid that I agree as well. A definite step in the wrong direction! Sigh... Kickstarter really ought to provide a way to back out of a project when major design changes such as this one occur. This is no longer the product I had ordered!"
This goes on and on and on in the comments section (not accessible unless you're a backer); you get the idea.
In Brydge's defense, they said they altered the hinge design because some backers wanted to have upgradability with iPad 3 and beyond. Still, it looks quite different from the original model advertised in the initial Kickstarter campaign.
With more and more products being funded and purchased through Kickstarter, situations like this might become far more frequent. At what point is a manufacturer on Kickstarter responsible for changes to the final product?

Should some of the Brydge's 3266 backers have the option to get their money back?

Let us know in the comments!