Would a 7" Mini-iPad Fragment the iOS and Apple User Experience?

Apple's long-rumored 7-inch iPad might be more than just a rumor, according to Barclays analyst Ben Reitzes. 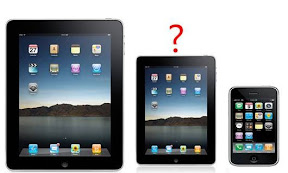 Discussing the iPad in a research note yesterday, Reitzes said the investment firm is still holding out hope that Apple will add a 7-inch tablet to its lineup. "Our global research team still sees some evidence of this product in the supply chain -- and we wouldn't be surprised if it wound up in the iPod Touch category if it indeed sees daylight," the analyst said. He did not provide any further details in the research note.

The iPad will also continue to cannibalize PC sales, Reitzes added. As such, he sees little need for Apple to create a "hybrid" Mac with a detachable screen, believing that iPad users will increasingly dock their iPads to keyboards.

Of course the iPad cannibalizes the laptop and desktop market, before the iPad there was no other choice but to buy one or the other. The iPad for a huge number of users can and is there only computer. For many others, the iPad makes a fantastic second or third computer for the household. In the business world, the iPad is a great solution for executives and IT support personnel who primarily maintain or support remote computers and servers.

The iPad can stretch the life of an aging computer or laptop by allowing users to use the iPad as the primary device while only using the slow and aging computer for those tasks that have to be done on that computer.
Will these users demand to have a hardware or a "real" keyboard? Some will. One of the advantages of buying an Apple iPad is that there is a huge accessories market for Apple's products. There are and will continue to be laptop-like accessories for the Apple iPad, so there is no need for Apple to create a "hybrid" device. These users have enough options, from the after market, to satisfy their thirst for a keyboard or laptop experience.

Looking at the tablet market, Apple stayed on top in the first quarter with a 68 percent share. Samsung took back the No. 2 spot, while Amazon dropped to No. 3 as Kindle Fire sales dropped. The analyst expects Apple to hang on to its top market share over the near term as the Android tablet landscape becomes even more fragmented.

Fragmentation is a serious issue in the Android world. Almost every month, some one shows me an Android device that they saved tons of cash on. They ask me, "did I get a good deal.". My response is always the same, "the proof is in the using". These people barely use it and hardly take it out in public to use it. It basically become a paper weight; an expensive paperweight at $79 to $179. The biggest issue that these devices suffer from is "the experience".

The touch experience is poor, with sluggish or non-responsive feedback being the top issues. Another area that suffers from poor experience is in the "store" area. Some devices don't have the "Google Play" or "Official store" which means there little to no apps available to the devices. Some have no store at all or simply point to a website to pretend they do. Users of one Android Tablet cannot simply say "download this app" or "do this" to another user of a different Android device. In most cases, the other person cannot duplicate the task. Each device maker does it own magic or lack of magic to its version of the Android operating software - making it a very fragmented OS.

In order for Apple to product a mini-iPad or max-iTouch, the new device must come very close to the same level of user experience for the buyer that they would have with the iPad or iPod Touch. Apple benefits from the marketing it receives when a sister or mother tells a brother or son to get the iOS device because you can do "this" (whatever that magical "this" is). Apple does suffer from some form of fragmentation though. The original iPad doesn't have a camera, so it can download certain apps and can not emulate what a new device could do. The original iPad is strategically missing gesture controls that the newer models got with iOS 5, even those they all use the same iOS. This is the exception as opposed to the rule.

A 7" inch device should avoid the exceptions and emulate the exceptional.
Also, the developer currently have to create a version of their software for the iPhone or for the iPad or make it universal. The rumored device must allow the developers' current software to work without having to create a third iteration. There is definitely a market for a tweener device that is sized between the iPhone and the iPad. Whether Apple is going to do so, is not known outside the Apple Design group and related partners, but it they are to be successful they should avoid anything that will fragment their advantageous and user experiences.

- Posted using BlogPress from my iPad