Pebble: E-Paper Watch for iPhone and Android Gets over 5 Million Pledges on Kickstarter

I love Kickstarter and I am often browsing the site to see what the next gadget or software is in the pipeline.  There is a project that is currently the biggest funded project in Kickstarter history.  Eric Migicovsky and his team created a prototype from cellular phone parts and initiated his Pebble project on Kickstarter with a lofty goal of $100,000.  Since then he had gotten pledges of over 5 million dollars.  On April 12, 2012, Eric wrote, "We're absolutely blown away by your support, Kickstarter. $1M in 28 hours!"  Well over $5M in a week is just crazy!!! They are probably on Mars  by now.   With just under a month to go, they are sure to increase that number by another 1 or 2 million. So what is Pebble?

Pebble is the first watch built for the 21st century. It's infinitely customizable, with beautiful downloadable watchfaces and useful internet-connected apps. Pebble connects to iPhone and Android smartphones using Bluetooth, alerting you with a silent vibration to incoming calls, emails and messages. While designing Pebble, we strove to create a minimalist yet fashionable product that seamlessly blends into everyday life.

Apps bring Pebble to life. We're building some amazing apps for Pebble. Cyclists can use Pebble as a bike computer, accessing the GPS on your smartphone to display speed, distance and pace data. Runners get a similar set of data displayed on their wrist. Use the music control app to play, pause or skip tracks on your phone with the touch of a button. If you're a golfer, feel free to bring Pebble onto the course. We're working with Freecaddie to create a great golf rangefinder app for Pebble that works on over 25,000 courses world-wide. Instead of using your phone, view your current distance to the green right on your wrist. These apps will be the first, with more in the works!


Want your watch to tell you when your next bus is leaving? Maybe you're jonesing to see your compile status or recent github commits.. Think push notifications, directly to your watch using the data connection on your phone. Want to check-in on your watch, or create an app that can monitor your sleep? Pebble can send data from the accelerometer and buttons back up to the internet.
Pebble can receive simple alerts and notifications from if this then that(ifttt.com) or our web-facing RESTful endpoint. More adventurous developers can use the Pebble SDK, with its Arduino-like abstractions and simple C structure, to gain full control of the watch. Multiple apps can run on Pebble, along side watchfaces and regular notifications.

Detailed SDK specs are available on our Pebble Dev Blog. 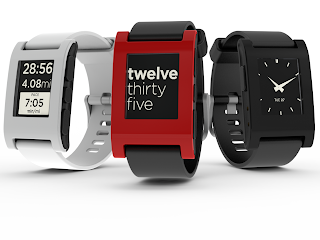 How does it work?
Pebble connects by Bluetooth to your iPhone or Android device. Setting up Pebble is as easy as downloading the Pebble app onto your phone. All software updates are wirelessly transmitted to your Pebble.

Unfortunately Pebble does not work with Blackberry, Windows Phone 7, or Palm phones at this time.

Where we're at We’ve been working on smartwatches for over 3 years now. The Pebble that you see in the video is a real, working prototype. With your support, we can bring Pebble onto wrists worldwide. While we're close to entering production, your contribution will help fund: If you are interested in the Pebble, you have until Friday, MAY 18, 11:00PM EDT to get on board as a backer.  After this date, you will have a longer wait and you will pay full retail for the watch.

STATS as of the date of this story...

This is finally a watch I can wear.  I am on board as a backer. You are now an official backer of Pebble: E-Paper Watch for iPhone and Android.

If you are interested in the Pebble, check out the site here at Kickstarter.