The Top Laptop-Like Solutions for the Apple iPad

The iPad is an awesome tablet computer. For many people it has given them an alternative to a buying a net book, a hot and heavy laptop or even a desktop computer. The iPad is so convenient; almost usable in most situations. While it is nice to be able to pull it out of a bag, case or even a jacket pocket and immediately start using it is wonderful. Using one of the 10 styli, God gave us, we can swipe through content or even type on the virtual keyboard. For a growing number of people, the iPad is their only computer or their primary computer. These people or any anyone else whom just wants to use a more traditional keyboard, there are some options on the market.

There are tons of cases that include a built-in keyboard, like Incase Origami Workstation

. These are primarily cases; typically a portfolio type case. While this may be OK for some iPad owners, there are some that wants more a laptop experience. They not only want a keyboard, but what the case and the iPad to function as if it was a laptop computer. There are also a few items on the market or soon to be on the market to fulfill these desires.

They all naturally include an integrated Bluetooth keyboard, but add some other features that gives the combined device a better laptop-like experience.  The two devices that offer stereo speakers or a touch pad are currently being developed and are not available at the time of this writing. Without further delay, here are my list of the laptop-like solutions for the Apple iPad. 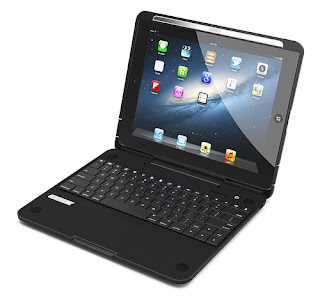 Features an all new “snap in” from the front design – which makes it very quick and easy to insert and remove your iPad 3. The new Crux360™ also features a “window cover” on the back – which allows you to cover or uncover the Apple icon. It is compatible with various types of screen protectors. In addition, we’ve simplified the powering and pairing process. It’s easier and quicker than ever to insert and use your iPad 3 with the Crux360™.

The Crux360™ features four modes:
1) Laptop Mode: which allows use of the keyboard.
2) Movie Mode: great for watching movies and videos.
3) Tablet Mode: great for reading books or magazines.
4) Carry Mode: when not in use the Crux360™ closes up and protects your iPad’s® screen from nicks and scratches. 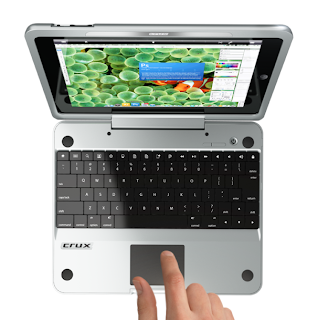 Is the world’s first keyboard case to feature both a remote Bluetooth trackpad and an additional-external battery for your iPad.

Trackpad: CruxCase™ has been developing technology that allows you to navigate the iPad via a remote Bluetooth trackpad. With the remote trackpad, you’ll be able to control your iPad’s screen using all the same multi-touch functions currently on iOS. Scroll pages, resize pictures, play games, and do many other functions without having to lift your arm to touch your iPad’s screen. The Crux Loaded™ is also the preferred tool when accessing another PC using a remote-desktop program such as LogMeIn Ignition™, Jump Desktop™, or Splashtop™.

Battery: The Crux Loaded™ features an extra external battery within its base. When the battery is connected to your iPad via Apple’s 30-pin cord, it extends your iPad’s battery life by about 7.5 hours between charges. 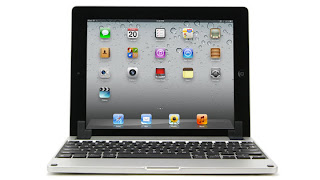 Brad, Eddy and Sam are developing an iPad case that will blur the lines between laptop and tablet. Called Brydge, the special case has a built-in keyboard that transforms your iPad into a more laptop-like device capable of performing many of the same functions you know and love from your traditional computer.

Made out of aerospace-grade aluminum, the case looks and feels like your iPad. Rather than look like your iPad shoved in a case, the two are designed to fit together in such a way that looks like they’re the same device. Together and closed, the two devices are slightly thicker than an 11" Apple MacBook Air.

The hinge on the case holds your iPad in place with super strong magnets which turns the unit on and off when opening andf closing the lid (aka iPad). The iPad can extend almost to the table, giving you 180 degrees of positioning much like you have with a traditional laptop screen. When you’re done using your tablet, you can close the case to put your iPad to sleep and protect the screen while you travel.

A pledge of $170 will get you the standard device. For a pledge of $210, you can get built-in stereo speakers. So, when you’re watching a movie or listening to tunes you can do so at a higher volume than you might be able to using just the iPad's speaker. It works with the iPad 2 and iPad 3 only (no iPad 1). When an iPad is docked in its upper half, it looks, for all intensive purposes, like a notebook.  Your iPad snaps into the upper lid section and the keyboard rest naturally on the lower half. The device has a scissor action chiclet QWERTY keyboard layout and 14 special function keys that allow you to copy, paste, control music and more.  The keyboard has a Broadcom version 2.0 high performance BCM2042 Bluetooth chip which pairs with your iPad. 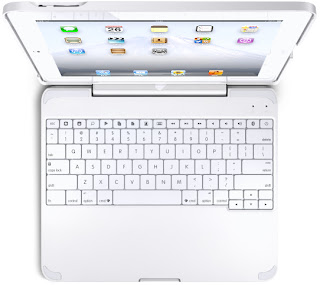 The ClamCase patent-pending 360º hinge enables the new iPad display to be positioned at any angle.  The sturdy hinge that prevents the iPad from flopping, and it lets you adjust it to an angle you think is best. You can even fold it over on itself, should you want to use the iPad purely as a tablet. The iPad will automatically wake when you open the case.

This accessory is made entirely from a hard shell polycarbonate (plastic) with a rubberized coating on the bottom. The iPad2/3 case weighs 1.6 lbs and the iPad 1 version weighs 1.8lbs. The built-in rechargeable Lithium-ion Polymer (Li-Po) battery is listed as providing 90 hours uninterrupted in use time, 100 day standby time, 3 years battery life and needs 90 minutes to fully charge. LED lights provide status of charge.  The units ships with a mini USB charing cable, but not with a power adapter. 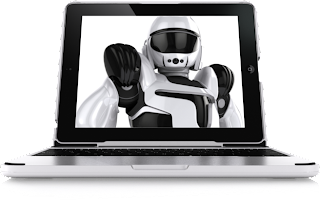 One note to keep in mind is that the iPad is not as wide as most laptops; therefore, any keyboard that is the same length of the iPad would be smaller than those typically available on a laptop. As a result, the keyboard will feel cramped and may require getting used to. I encourage you to research these options and read reviews by tech reviewers and customers before making a decision. I always suggest doing a search on YouTube to see the item in action.