What Does the Apple IPad 3 Have to Have?

Apple is scheduled to release the next version of its iPad; the wildly popular mobile computer that many thought should have never been built. There are tons of rumors about which features will be included with the next version. While we all would love to see tons of new feature added to the new iPad, Apple is unlikely to deliver on all or most of those wishes. Are there any pressing features that Apple must include on the next iPad?

When the iPad 2 was announced last March, there were tons of potential competitors claiming to be releasing a new device or iPad killer. The most pressing features, that these potential devices were going to include that Apple did not have on its device were cameras. Whether Apple was ready to put cameras on his iPad or not it had to respond. Apple could not allow those competitors to reach the market before it had a device with those same feature sets. No matter how poor the two cameras were that Apple included on this iPad 2, they were good enough to keep the competitors at bay. One year later, the cameras remains to be the most important upgrade required for the new iPad. Even though most people struggle to see why there is even a need for the iPad to have cameras on it.

Most people understand that a front facing camera is required for video chatting. Most people are lost on the need to have a high-quality camera on the rear. You have to realize that most users of the iPad have never had a camera on their traditional computer; why have two of something that you never had one of? It is one of those things that you have to have first in order for the developers to make incredible things with it. Because it's not just an mobile camera, it is a mobile camera on an incredibly powerful mobile computer. The computer, the software and the imagination of the developers are the key ingredients that makes the iPad's cameras incredible and even magical. There is no way that the next iPad will not have this feature upgraded.

We’ve heard a lot about how the iPad 3 will finally get a 2048×1536 Retina Display, but it’s easy to forget exactly how many pixels that is. The only non-scientific answer is “a bunch.” On my PS2, the ESPN football game announcer always uses "a bunch" when describing a score that was unbelievable. If the score was 96 to 10, it would read like this "The New England Patriots are leading "a bunch" to 10!". If Siri was used to describe how many pixels the new Retina display would include, she definitely would say "a bunch". Heck, when the Retina Display iPad 3 ships, it will actually pack more pixels than everything short of Apple’s 27-inch iMac! Do we really need this much resolution on a mobile device? 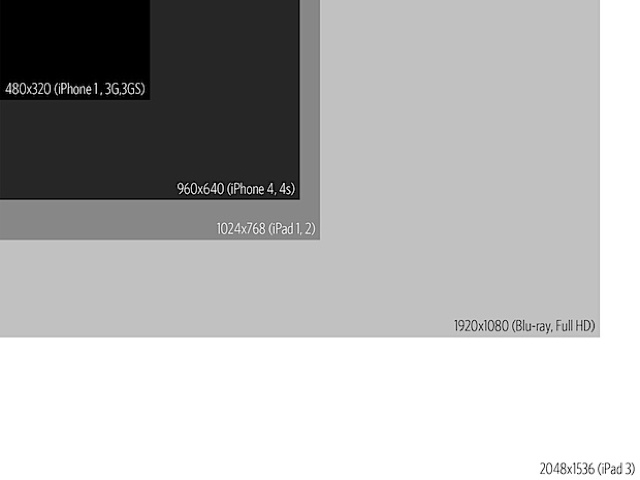 The included chart comes from cloerner, but Paul Horowitz over at OS X Daily raises an interesting point that a Retina Display iPad 3 will make an interesting challenge for developers, who will be designing their apps on Macs that will very likely have an inferior resolution to the tablet their building for. Of course, with HiDPI ”Retina Display” Macs on the horizon, that’s probably not going to be a problem for developers for very long. Apple will once again set the standard for what a display can and should be. Although my many regarded the iPhone 3G as having one of the best screens in the business, the iPhone 4 took it to a whole new level. Having used the Retina display for a while, it is tough to think of going back to the old pixellated low-res screens. Honestly, the screen on the iPad 1 and 2 looks good just like the one on the iPhone 3G did, but the newer one will look incredible.

It is like the difference between Blu-ray and DVD. For people who have not seen Blu-ray material, the DVD format is just fine. Once they have, it is tough to go back to it. I have this struggle with my family, in regards to my HD television content. My wife continues to watch and record the standard resolution channels instead of the High-Definition (HD) versions of the same channel. She swears that she don't see a difference. While this change is most like included with the next IPad, it isn't as pressing as other things I would to see.

The thing I would like to see most is an increase in memory storage sizes. The minimum should be no less than 32GB. So keeping to the three models, they would be 32GB, 64GB and 128GB units. I had a 16GB iPod Touch and a 16GB IPad 1 and both had inadequate storage capacities. My iPhone 4s has 32GB and is better equipped than the other two. With this. I am able to include more of the things that make me happy on the go without having to swap out media all the time. The 128GB may see huge, but even with the push towards cloud storage, there is plenty of justification to have your data local versus remotely. My Ultrabook computer has a 128GB SSD hard drive and believe me, it didn't take very long to fill it to capacity. There is a slim chance that we will see a bump in capacity in the next iPad version.

Where can the new iPad show the most improvement? I believe it is in the software! The interface for the iOS platform is so badly in need of a facelift. The KISS or keep it simple sweetie approach from Apple is getting old in the tooth. The home screen or launch screen on the Apple iOS platform is badly in need of a upgrade. The Android devices run circles around iOS as far as the interface goes. Apple responded in its last OS revision with the new notifications section that include widgets for weather and stock information, but this is clearly not enough. Even the non-techies desire these types of improvements. People don't want their device looking exactly the same as the other people.

When the competition depicts the Apple followers as cookie-cutter drones, they are definitely on target when it comes to the interface of the iOS devices. Everyone of them look the same. There is very little room for customization. Apple should strive toward giving users more choices.

The biggest changes required for me, are the improvements needed to the AppStore. With the 5.0 revision to the iOS, we saw some much needed changes to the AppStore. We saw an area for past purchases to could be seen and downloaded. We saw the addition the genius feature to help suggest new applications. The changes began last year when the AppStore navigation was improved and better filtering functions were added to help cut through the ever growing number of apps. Despite this, the AppStore needs a lot of attention.

Despite needing improvements, the Apple AppStore recently reached its 25 billion app download milestone. The AppStore reached the historic milestone on Saturday, March 3, 2012. Apple announced the winner of the $10,000 App Store gift card as Chunli Fu of Qingdao, China, who downloaded a free version of the ‘Where’s My Water?‘ app.

“We’d like to thank our customers and developers for helping us achieve this historic milestone of 25 billion apps downloaded,” said Eddy Cue, Apple’s senior vice president of Internet Software and Services. “When we launched the App Store less than four years ago, we never imagined that mobile apps would become the phenomenon they have, or that developers would create such an incredible selection of apps for iOS users.” App Store downloads crossed the 1 billion mark back in April of 2009, and then broke through the 10 billion mark in January of 2011. Despite all of its success, there is plenty of room for the AppStore to be made better.

If you have never seen an Android device personally, ask a friend or family member to show you theirs. Launch the Market app on the Android device and you will immediately see what Apple needs to change. If I searched the Android Market App for a term like "rose", I would get results for apps, music, books and anything else that us available for sell with that term in the title or description. I may have been looking for an app, but now I see more items for consideration and for buying. This makes south sense that I am surprised that it is taking Apple so long to recognize this.

Apple has a separate AppStore, a separate music store and a separate bookstore. Look at the real world of retail, why is Meijer, Walmart and even Target doing well? Shoppers have more choices under one roof. Apple needs un un-fragment it shopping experience and put it all under one roof or one app. They need to have a single source for purchases. But it they do that, won't it make it more difficult to search for what you want? I don't think so, but they need to think differently from how they have in the past.
They recently purchased Chomp. People think that the Cupertino, California-based company paid about $50 million for Chomp. Chomp, the mobile application search engine developed by entrepreneurs Ben Keighran and Cathy Edwards has been bought by Apple. Apple has not disclosed the details of the deal.

Chomp's software provides a facility to the internet users to find and download the applications for iPhone and iPad and the Android operating systems. Chomp has made the task of finding software easier by allowing the user to search by functionality rather than their name or title. So they find their desired applications more conveniently. This acquisition provides Apple with resources to help get the AppStore some much needed improvements, but it may not make it on the next iPad at launch though. Whenever it does arrive, it will be a much needed and welcomes addition to the iOS platform.
What do you see as a required feature for the new iPad?
By Carl Brooks - March 06, 2012