Matthijs Hollemans has this to say about his ebook series titled, "The iOS Apprentice: iPhone and iPad Programming for Beginners":

"This first tutorial is completely standalone and teaches you how to write a complete iPhone game named Bull’s Eye. The best part is you can read it here in its entirety for free! The other tutorials in this series build on what you’ll learn here.


Each tutorial describes a new app in full detail, and together they cover everything you need to know to make your own apps. By the end of the series you’ll be experienced enough to turn your ideas into real apps that you can sell on the App Store! Even if you’ve never programmed before or if you’re new to iOS, you should be able to follow along with the step-by-step instructions and understand how these apps are made. Each tutorial has a ton of illustrations to prevent you from getting lost. Not everything might make sense right away, but hang in there and all will become clear in time. Writing your own iPhone and iPad apps is a lot of fun, but it’s also hard work.


If you have the imagination and perseverance there is no limit to what you can make these cool little devices do. It is my sincere belief that this ebook series can turn you from a complete newbie into an accomplished iOS developer, but you do have to put in the time and effort. By writing these tutorials I’ve done my part, now it’s up to you... Enjoy the first tutorial! If it works out for you, then I hope you’ll get the other parts of the series too. "

I must say that I have looked far and wide for the best resources to help me learn Xcode.  This is one of the best tutorial ebooks that I have ever seen (both Free and Paid books).  It not only uses the most current Xcode version available, but the developer speaks in such a way that the greenest novice can follow along with out be intimidated or deterred from reaching the end of the lesson.

I signed up for the free newsletter over at www.raywenderlich.com. Ray has an excellent site with many free iOS development tutorials.


After signing up for his newsletter — which is a very useful resource in its own right! — I received an email with the download link for the free copy of the epic-length tutorial iOS Apprentice: Getting Started by iOS Tutorial Team member Matthijs Hollemans (fully updated for iOS 5!).
I worked on it Saturday morning and after a few hours I have a fully functional game on my iPhone 4s that I had created with my own hands.  What a wonderful feeling!
Here are the screen shots of the Bull's Eye app that I created using the free tutorial.

I changed some of the text colors to make the key values pop. 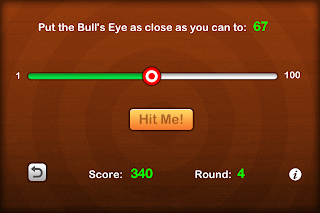 I displayed the number that was selected from the slider unto the pop window so that you could see which number you had chosen. 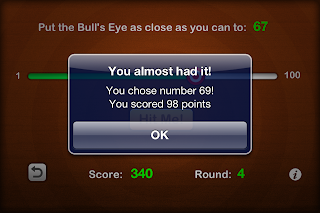 Also you can see the random number that the program selected in the background to assure you of what you should chosen. 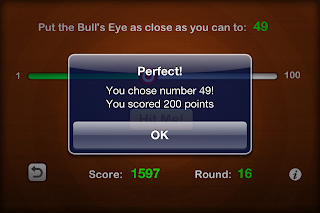 I elected to keep the original "info" screen text plus adding a tribute to the tutorial and a link to my blog. 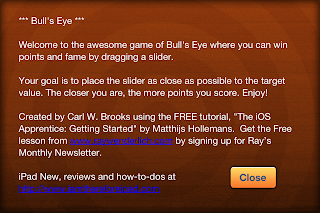 Make sure you get your free copy of the the Tutorial and start having some fun yourself programming for the iPhone and iPad.