The App Store reached the historic milestone of 25 billion application downloads early on Saturday, though Apple has yet to announce the winner of the $10,000 App Store gift card.

I was watching the counter around midnight on Saturday while I was talking to my brother on the phone. I knew it would happen as I slept. Man I wanted that $10,000. I wonder who won and which app was being downloaded. Apple will definitely mention this on the March 7th event in it's slides when announcing the newest iPad (and possibly newest AppleTV).

Apple changed the counter on its homepage to a thank you page early on Saturday after it reached the 25 billion number. The graphic shows the App Store icon surrounded by icons of popular iOS apps, such as Twitter, Yelp, Instagram, eBay and Fruit Ninja.

"A billion thanks. 25 times over. The App Store has reached 25 billion downloads. Thanks for getting us there," the page read.

Customers are instructed to come back to the 25 billion app countdown page later to see who won the App Store gift card.

The countdown took just over two weeks from when Apple initiated it on February 17. At that time, the number of app downloads stood around 24.29 billion.

Apple held a similar countdown to the 10 billionth App Store download last year and reached the milestone on January 22, 2011.

The company has paid out over $4 billion to App Store developers and now carries roughly 600,000 applications in the digital storefront. The App Store launched in 2008, serving up 1.5 billion applications in its first year of operation. 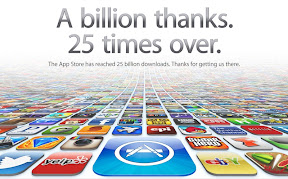