AirDisplay - Extending beyond the Mac Desktop

I love my iMac.  The 21" screen is big and beautiful.  Sometimes that big screen not enough.  At work, I have four (4) monitors on my Windows PC.  I get use to working with multiple screens and it makes working on my single screen iMac troublesome.  Thankfully I have AirDisplay on my iPad 1 to create another monitor for my iMac.  If you never used a second monitor on your desktop or laptop, I might as well me talking Chinese (这将是疯了！).  You have no idea how powerful your workspace becomes by adding a second monitor.  At home, I don't have room for two monitors to sit on my desk, but I have plenty of room for my iPad to become my second monitor when I need it. 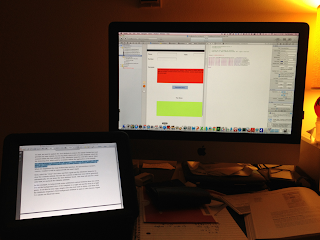 In the example above in the picture, I am working full screen on the iMac with xcode. On the iPad, I have a PDF book open. You might ask, "Why not just have the PDF book open in the iPad's native software?" I could do this, but the book would simply be read only. Using AirDIsplay to show it in a separate monitor, I can interact with the book and copy text from the page so I don't have to type all of the code into xcode. The great thing about is you can use the mouse, touchpad or your finger to manipulate the content on your Mac. It is a wonderful tool to add to your workspace when you need to.

The iOS app is $9.99. Install the app from the AppStore and then download the AirDisplay Connect for Mac to load in the background on the desktop or laptop. In minutes, you will have your iPad acting as a second monitor for your computer (it works with Windows too).

NETWORK: In order for Air Display for Mac to work both computers must be connected to the same network. Wi-Fi and wired Ethernet are both supported.

The Air Display driver is incompatible with these specific machines.
Affected Mac models include:

Avatron® Software is a leading developer of productivity-enhancing applications that blur the boundaries between personal computers, mobile devices, and the cloud. Avatron’s Air Sharing file-sharing app was downloaded by more than 1 million users in its first two weeks and raised the bar for iOS application design and quality. The company’s Air Display app turns an iPad into a wireless computer monitor with a touchscreen. Avatron was founded in April 2008 by Dave Howell, a former Apple software engineering manager, and a team of veteran Mac OS X programmers. The company is based in Portland, Oregon.