Jailbreak the Apple TV 2; Why I did it and Why You Might too

Many of you know that I love to Jailbreak my iOS devices. I had lost my iPad Jailbreak when I upgraded to iOS 5.0.1, but I was able to regain the Jailbreak with the release of the redsn0w jailbreak tool over the Christmas break. My iPad 1 is happy once again.

Jailbreaking, is the process of removing the limitations imposed by Apple on devices running the iOS operating system through use of custom kernels. Such devices include the iPhone, iPod touch, iPad, and 2nd Gen Apple TV. Jailbreaking allows users to gain root access to the operating system, allowing iOS users to download additional applications, extensions, and themes that are unavailable through the official Apple App Store. A jailbroken iPhone, iPod touch, or iPad running iOS can still use the App Store, iTunes, and other normal functions, such as making telephone calls. The term 'jailbreaking' has also been applied to other computer systems, such as the Sony Playstation 3. Jailbreaking is a form of privilege escalation.

Unlike rooting an Android device, jailbreaking is necessary if the user intends to run software not authorized by Apple. A tethered jailbreak requires that the device be connected to a computer each time it needs to be booted; an untethered jailbreak allows the device to be powered without computer assistance. Under the Digital Millennium Copyright Act, jailbreaking Apple devices is legal in the United States, although Apple has announced that the practice "can violate the warranty". To avoid any warranty issues, the Apple TV must be restored to the non-Jailbroken state by hooking it up to the desktop and iTunes and performing a restore.

Over the Christmas 2011 break, I finally picked up an Apple TV (2nd Version)

after months of wondering why anyone would even want to have one. Actually I picked it up the day after Thanksgiving for $89. It is normally $99, but available at Amazon

for a little less. I previously did not see a good enough reason to spend nearly $100 for the device.

The Apple TV allows you to rent Apple's large selection of HD movies and commercial-free HD TV shows. It has a Netflix app that allows access to the huge catalog of movies and TV shows available to Netflix subscribers in the U.S., Canada, Latin America and Mexico. You can browse and play YouTube videos, watch HD podcasts, and listen to Internet radio. You can access online Flickr and MobileMe photos galleries. Plus if you have photos, music, movies or videos on your computer, they can be seen and\or heard on your TV and\or home theater speakers.

This all sounded good, but I could do all of this already through some other means. I can rent movies and TV shows (via Amazon app), listen to online radio (Pandora app), and view Youtube on my Home Theater system from Panasonic. I had an HDMI cable hooked to my iMac, so I could view my photos, music, movies and videos on my computer on my 50" HD television (though it tied my computer up a bit to do so). I have Netflix on both my Wii and the same home theater system, so the app on Apple TV was no advantage by itself. So as you could guess, I didn't see a reason to spend nearly $100. Two factors help push me to make the leap; one was the addition of Airplay to the Apple TV OS..

With AirPlay mirroring, whatever is playing on your iPad 2 or iPhone 4S can wirelessly play on your HDTV. And your photos appear automatically with Photo Stream from your iCloud account. This is an incredible feature that was added with the latest update to the Apple Tv's OS (4.4.4). To be able to instantly display content that is on my iPhone 4s is awesome. All without any cables. My iPad 1 only wirelessly displays content that has an app that is specifically designed for Airplay. The mirrorring is disabled on the iPad 1 for some silly reason. To get my iPad's content mirrored on the big screen, I would need a $40 cable and a Jailbreak. The other factor that sold me was the realization that I did not have any of the above mentioned functions in my bedroom. With the tiny size of the Apple TV and the minimum requirements needed to hook it up to the TV, the Apple TV is quickly moved between my bedroom and the Livingroom. With two young daugthers, I am limited to what shows or movies I can watch in the "Family\Livingroom", so having access to my content in the bedroom is awesome.

Now the unsung hero of the Apple TV is the Jailbreak. I knew that a Jailbreak existed for the Apple Tv, but I never paid much attention to it. My younger brother, who has become a fan of Apple after getting his first generation iPod Touch (after I fell in love with the device and told him about it), had insisted that I look into Jailbreaking the Apple TV. Had I know what it had to offer, "Jailbreaking" would have been the third reason I bought the Apple TV. Instead, it was an afterthought after the purchase. Boy am I glad I looked into it.

The latest Apple TV Jailbreak is made possible with the Seas0nPass tool. This one is significant because it Jailbreaks the Apple TV OS version that brought the Airplay feature into play. As is typical with most Jailbreak tools, Seas0nPass does only one things - Jailbreak. The Jailbreak is simple and only takes a few minutes. So once used, the Apple TV behaves normally. In fact, the only thing that is different is the logo that is dislpayed when the Jailbroken Apple TV is booted up.

What happens after the Jailbreak is what makes the Jailbreak worth it or leaves you wondering why you even bothered. A lot of people don't have any idea what to do after they perform the Jailbreak on most of the iOS devices because it can mean so many different things based on what people chose to add. This is even more true with the Apple TV because there is less information about it than it is for the Apple iPhone, iPod Touch or iPad. So I will share with you what I added and see if it excited you too.

When I first consider the Apple TV, I couldn't do so without considering the Google TV. The Google TV was on my radar because it offered Internet browsing while the Apple TV didn't. If AirPlay was never added to the Apple TV, maybe I would have bought a Google TV device instead. Thankfully, I now have Internet Browsing on my Jailbroken Apple TV - thanks to the aTV Flash Black tool. aTV Flash (black) is a user-friendly software package that supercharges your new black AppleTV, unleashing a plethora of new functionality. My favorite feature is the Couch Surfer app that lets me surf the Web on my TV. Who wouldn't want to visit their favorite sites, stream HTML5 video, and update Twitter from the biggest screen in the house; the HDTV.

The Browser menu offers the ability to enter a web address, perform a Google
web search, access saved Bookmarks, manage Surfing History and control browser settings. In the settings area, you can set up your favorite web page to launch automatically when you turn the Apple TV on.

My next best feature is the Media Player, which empower the Apple TV to play popular media formats including MKV, AVI, MP4 & many others on the big screen without conversions. The Apple TV, without this player, is very limited by which types of videos or movies formats it can play. Media Player makes all of your videos playable without you having to think about it. If that wasn't good enough, it also grabs the movie metadata details from the web so you get Movie cover art, movie ratings, movie descriptions and more for all of your movies. The media can be stored on a PC, Mac and even a NAS device and the Apple TV can find it and play it. If you use your computers' credentials to log into the computers from Apple TV, then you can navigate the entire filesystem to access and play your media. If you don't use your credentials, then the Apple TV can only access the shared drives on your computer(s).

Not a fan of iTunes? The Media player makes your media available regardless of whether you use iTunes or not. It can play the above video formats plus the popular audio formats like MP3 and WAV. This is made possible via the Last.fm app that can be installed with the aTV Flash Black program. Last.fm also lets you listen to music streamed from the Internet.

There is also more to like or love with the aTV addons like Weather, RSS feeds for management of my news feeds, and Vimeo for some more zany Internet videos, but it is the addon called XBMC that helps to bring me closer to cutting the cord on cable. The XBMC addon can be added from the Maintenance menu that is added to the Apple TV's main menu area; in fact all of the addons have to be added from the maintenence menu after installing the aTV Flash Black program.

The whole process is very simple to accomplish, but some optional parts do require some technical savvy to accomplish. If you can follow simple instructions, you too can enjoy some great new content on your Apple TV. The Jailbreak is free, but the aTV Flash Black is $30.

Here are the steps I took to Jailbreak and modify my Apple TV.

1. Install the Seas0nPass Jailbreak with the instructions found here or by viewing the following video.

2. Purchase from the aTV Flash Black and download it to your desktop and install it with these instructions. Once it is installed and the Apple TV reboots, go to maintenance menu and install the add-ons you desire.

3. Make sure you install XBMC, but afterwards I highly recommend it. It will give you access to some additional video sources.

4. You will want to add some XBMC repositories to XBMC so that you have access to additional video content like the "Hulu" and "Free Cable" channels available from the Bluecop repository.

It is recommended you install the Repositories Installer Add-on for XBMC. Alternatively you could install an individual repository.

To do either of these, you will need to install from a ZIP file:
1. Download the ZIP file and save***** to a location accessible by XBMC. I recommend saving it into /var/mobile via a FTP app like FileZilla.
2. Open XBMC and browse to System > Add-ons > Install from zip file.
3. Browse to the file you downloaded and select it.

If you installed the Repositories Installer, browse to Programs, open the installer and install any repositories you like. You will need to restart XBMC for them to be accessible.

To access the contents of the newly installed repo(s) browse to Videos > Video Add-ons > Get More...

***** This is could be the toughest part of this who article for a non-techie.
Use a FTP program like Filezilla to copy the zip file(s) to Apple TV 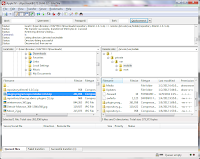 If you got the FTP process down back, try installing this one to get access to Crackle videos on your Apple TV.