Zombie Highway - Both a Thrilling and Terrifying Ride

If you want an inexpensive thrill ride with tons of zombies to make that trip a short lived one, Zombie Highway is the way to go. Packed with gangs of the living dead that leap at your vehicle, with one intent on their hapless minds; to eat your brains - Zombie Highway is worth the play and the pay!

The game is comprised of a very simple concept; drive your vehicle down the highway for as long as you can. Zombie Highway is very simple in concept, buy quite challenging in execution. If you ever watched the Walking Dead series, you may have thought, "Why don't they just get in a vehicle and drive as fast as they can until there are no more zombie around?"

You wouldn't be the only one to think this nor the only one to attempt it. The highway is scattered with abandoned vehicle whose drivers have long become breakfast, lunch, dinner or even a light snack for the hungry zombies that roam the earth.

The two facts of the game that are unavoidable are you will try as many others have and you will die for your efforts. The only variables that you have any control over are how long you live in your attempts; the vehicles to have to drive, the weapons you have at your disposal and the difficulty of the challenge.

The controls are simple, tilt your device to steer your vehicle through the maze of abandoned vehicles while tapping on the screen to shoot your chosen weapon at the zombies that leap and hang onto your moving vehicle. In addition to the in-vehicle weapons, you can use the abandoned vehicle to help scrape the zombies from the sides of your vehicle. Sounds simple, but some of the zombies are tough and require multiple slams against the obstacles. The problem is made more difficult than it sounds because you are driving at top speed, more zombies are leaping at you at the same time requires you to multitask with draws your attention away from driving. The zombies are strong and will tip your car over quickly if you don't get them off your vehicle as soon as possible.

Think you got the game licked? Try doing it in the fog with your visibility limited. How about doing it with no weapons available to you. There are enough changes that you can tweak it so that the game has more life than you do during any given attempt.

The game is an universal app and will play on the iPad, iPhone and iPod Touch. The game is $0.99. There is also a lite version which is free, so there is no excuse not to have some fun. I love free and normally stick with the free versions, but it only took me a few tries before I slapped down the $0.99 for the paid version. 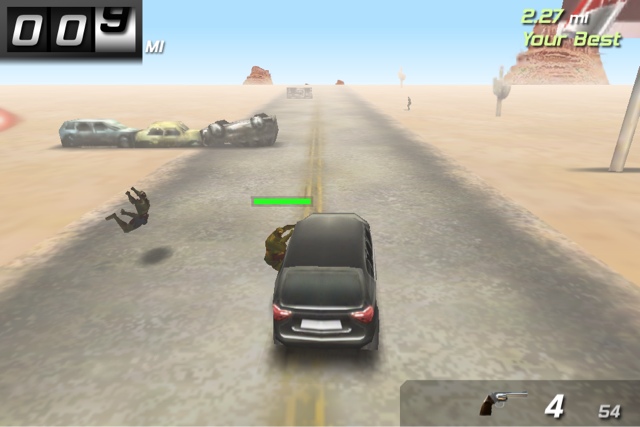 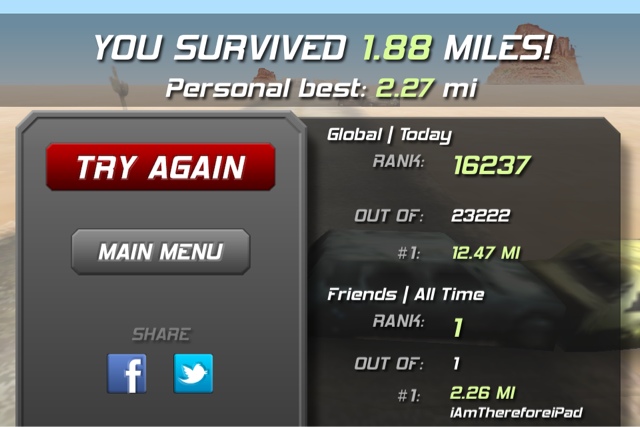 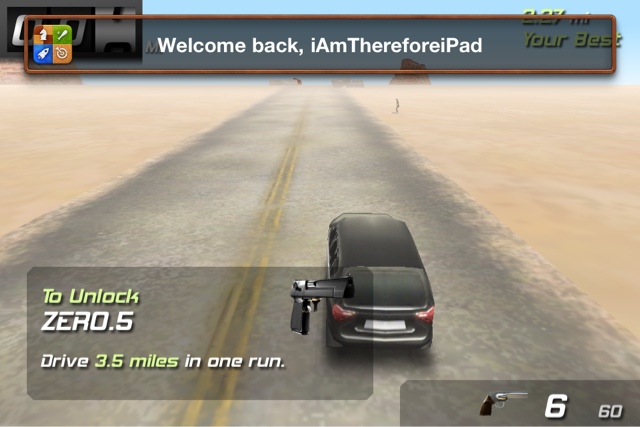