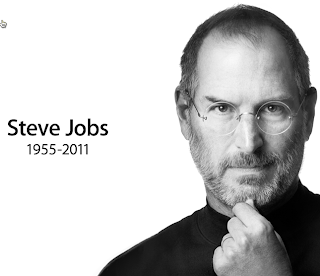 Steve Jobs, the mastermind behind Apple's iPhone, iPad, iPod, iMac and iTunes, has died today at the age of 56.

"We are deeply saddened to announce that Steve Jobs passed away today," read a statement by Apple's board of directors. "Steve's brilliance, passion and energy were the source of countless innovations that enrich and improve all of our lives. The world is immeasurably better because of Steve. His greatest love was for his wife, Laurene, and his family. Our hearts go out to them and to all who were touched by his extraordinary gifts."

The homepage of Apple's website this evening switched to a full-page image of Jobs with the text, "Steve Jobs 1955-2011."

Clicking on the image revealed the additional text: "Apple has lost a visionary and creative genius, and the world has lost an amazing human being. those of us who have been fortunate enough to know and work with Steve have lost a dear friend and an inspiring mentor. Steve leaves behind a company that only he could have built, and his spirit will forever be the foundation of Apple."

Jobs co-founded Apple Computer in 1976 and, with his childhood friend Steve Wozniak, marketed what was considered the world's first personal computer, the Apple II.

Industry watchers called him a master innovator -- perhaps on a par with Thomas Edison -- changing the worlds of computing, recorded music and communications.

In 2004, he beat back an unusual form of pancreatic cancer, and in 2009 he was forced to get a liver transplant. After several years of failing health, Jobs announced on Aug. 24, 2011 that he was stepping down as Apple's chief executive.

"I have always said if there ever came a day when I could no longer meet my duties and expectations as Apple's CEO, I would be the first to let you know," Jobs wrote in his letter of resignation. "Unfortunately, that day has come."

We knew Steve was ill and he looked thin and weak during his limited role during the WWDC last June. The world has lost an incredible contributor of technology and of innovation. The "S" in the new Apple iPhone 4S, that was announced yesterday without Steve in attendance, will no doubt go on the symbolize Steve and what he does for Apple, Technology and the World. We will miss you, Mr. Jobs.
By Carl Brooks - October 05, 2011