The iPad in Your Hand: As Fast as a Supercomputer of Yore

It’s common wisdom that the computer you can hold in the palm of your hand today is as powerful as a computer from years ago that filled an entire room.

But now Jack Dongarra, one of the computer scientists who keeps track of the world’s 500 fastest computers, has figured out just how fast that computer in your palm really is.

Dr. Dongarra, who is on the computer science faculty at the University of Tennessee and a researcher at Oak Ridge National Laboratory, is one of the keepers of the Linpack computing benchmark, a linear algebra test that measures the mathematical capabilities of computers.

His research group has run the test on Apple’s new iPad 2, and it turns out that the legal-pad-size tablet would be a rival for a four-processor version of the Cray 2 supercomputer, which, with eight processors, was the world’s fastest computer in 1985.

Dr. Dongarra’s researchers also discovered that the new iPad2 is about 10 times as fast as its predecessor, the original iPad. That is likely because of some design changes in the microprocessor used in the new version of the Apple tablet.

To date, the researchers have run the test on only one of the iPad microprocessor’s two processing cores. When they finish their project, though, Dr. Dongarra estimates that the iPad 2 will have a Linpack benchmark of between 1.5 and 1.65 gigaflops (billions of floating-point, or mathematical, operations per second). That would have insured that the iPad 2 could have stayed on the list of the world’s fastest supercomputers through 1994.

The Cray 2 was an unusual computer even by the standards of its designer, Seymour Cray. About the size of a large washing machine, it was cooled by immersion in a liquid called Flourinert that had been developed by 3M, and that was occasionally used as a human blood substitute during surgery.

The machine was housed in an aquariumlike structure, and was affectionately nicknamed “bubbles.”

Meanwhile, the fact that the iPad runs off a battery and is air-cooled has given Dr. Dongarra some ideas, like building a supercomputer composed of a couple of stacks of the tablets. 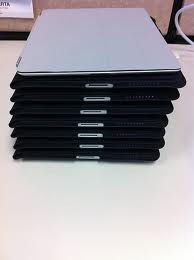 “The price-performance is probably not that great,” he said. “But the interesting thing here is the power consumption.”

He noted there were some potential technical obstacles.

“To put together multiple iPads to make a cluster is a bit challenging,” he said. “They would have to be jail-broken and then use wireless for the inter-iPad communication.“

But he hasn’t given up on the idea.

“It could be done and provide a very power-friendly cluster,” he said.

His colleague, the computer designer Steve Wallach, who was portrayed in the book “Soul of a New Machine,” has even been thinking about potential names for such a novel supercomputer.

He has previously considered a hypothetical parallel supercomputer known as NOW (for network of watches). Now Mr. Wallach proposes NOP (network of Pads).

He notes that it is conveniently named for a low-level computing instruction meaning “no operation.”