Right on schedule, Apple has updated their iMac line of computers. This update brings quad-core i5 processors to the entire line, faster graphics, a new FaceTime HD camera, and Thunderbolt. If the i5 isn’t fast enough for you, there is an i7 build-to-order option at up to 3.4GHz. 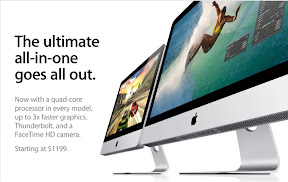 Apple today updated its signature all-in-one iMac with next generation quad-core processors, powerful new graphics, groundbreaking high-speed Thunderbolt I/O technology and a new FaceTime HD camera. Starting at $1,199, the new iMac is up to 70 percent faster and new graphics deliver up to three times the performance of the previous generation.

Also, here is a breakdown of the model configurations:

I have been waiting to purchase my first Mac. The time is almost here for me to buy. Apple says that the OS X Lion is set for release in summer 2011. I waited for the hardware change, now I have about one or two more months for the software to upgrade.