So Apple’s annual developers conference is coming up, but don’t bother looking up tickets because Apple sold out of them on Monday. Yeah, they sold out already, and in record time nonetheless. With fast ticket sellouts come quick scalpers and that is definitely the story here.

Many people are scalping tickets to the event on eBay with the highest closed sale topping the list at $4,146. That is a $2,547 profit over the original sticker price of $1,599. Based on the previously sold auctions, the average selling price is about $3,200. 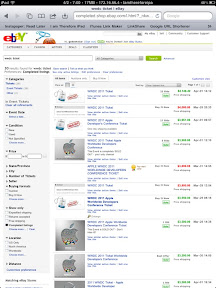 The Worldwide Developers Conference (WWDC) runs from June 6th to June 10th, 2011 and was sold out as of Monday, March 28th, 2011 in less than 12 hours which was dramatically faster than last year when it took a lousy eight days to sell out. 2009 wasn’t even close when it took almost a month to sell out. Tickets for this year’s WWDC were priced at $1,599, the same as they were for the 2010 edition.

Apple allows developers to buy multiple tickets with extra activation codes in order to hand them out to colleagues. However, some of these developers are taking advantage of the sellout and are selling their extra tickets at extremely high prices. As of Saturday, April 2, the ticket with the highest bid stood just over at $4,000.

The only people allowed to attend the event are Apple-registered developers but the entry bar is low. Programmers only have to pay $99 for a one-year membership to Apple’s developer program and that’s it, there are no other eligibility requirements.

One good thing, for developers that is, is that Apple does not explicitly restrict the resale of WWDC tickets.

Scott Schwarzhoff, Vice President of Marketing for Appcelerator, the company known best for their multi-platform Titanium development tool, was not surprised about how fast the tickets for the event sold out. According to him, “The message from Jobs at the launch of the iPad 2, that this is the ‘post-PC world’ is hitting home. If you want to be part of that post-PC world, as a developer you need a ticket, and that ticket is WWDC.”

Schwarzhoff also argued that even though the iPod and iPhone have been successes for Apple, the iPad is the first device that has really grabbed the attention of business software developers. “You’re seeing demand from the more traditional IT and computing industry because of the iPad,” said Schwarzhoff. “The iPad is affecting areas that previously weren’t affected by a pure consumer device.”

It has already been noted that this year’s conference is expected to focus primarily on software as opposed to hardware and that the iPhone 5 will most likely not be in attendance. With one of the most anticipated devices since the iPad 2 not coming out at the conference it's surprising that the conference sold out so fast.

If you want a ticket to the show, eBay might be the only option you have, but be ready to part with about $3,500 - $4,100. You still need transportation and a hotel for the week long stay.