The Onion, known for parody and satire, surely timed this intentionally. The site released an official iPad version of its app on the day best known for faux news, on April Fools' Day.

The app, free of charge at the App Store, gives you mobile access to both the Web and TV-based satire The Onion is known for.

Known as America's Finest News Source, a term it applies to itself, The Onion has recently written the stories "American Media Reports News Other Than Zoo's Escaped Cobra As If Anything Else Really Matters," "Butler Bulldogs Inspire Thousands Of Tall, Goony-Looking Midwestern Dorks," and "American Dream Declared Dead As Final Believer Gives Up." 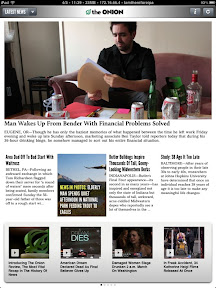 The iPad app is called "The Onion Tablet", last year they released "The Onion" for the iPhone and iPod Touch one day later - April 2, 2010.