As the iOS faithful know, Cydia is the Jailbroken iOS app store that complements the official Apple App Store. It doesn't compete with the App Store, because it doesn't offer the same apps; it supplies unofficial iOS apps that offer themes, iOS tweaks, and enhancements for jailbroken iPhone handsets, iPod units and Apple iPad tablets that Apple doesn't offer at all. But just like the official Apple App Store, the Cydia store offers both free and paid items for its customers. Many iOS device owners visit Cydia daily to enhance and customize their devices, it appears that big companies may now be looking to Cydia for advertising. 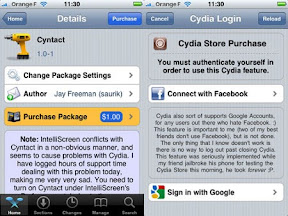 According to an article over on 9to5 Mac by way of Modmyi, Car making giant Toyota is apparently running an ad on Cydia to promote the Toyota iPhone UI theme as part of their campaign to promote the Scion tC.

Apparently Toyota contacted Cydia with a view to purchasing ad slots in the Cydia storefront app…” Scion, a brand of vehicles manufactured by Toyota, recently developed a custom iPhone theme specifically for jailbroken devices, submitting it to us for hosting in Cydia. This is the first major corporation we have seen put direct positive attention into the jailbreak scene, developing specifically for it and addressing this large userbase. Could this be a turning of the tide for the previously “outlaw” jailbreak community?”

Obviously this move by Toyota to advertise on Cydia will undoubtedly annoy Apple as Toyota could have been a potential iAds advertiser, but it does go to show that even the big names in the motor business aren’t against advertising with something Apple doesn’t like.

Could Toyota be a sign that more large companies may be looking towards Cydia for advertising as there are millions of users hitting Cydia is search of jailbroken apps and thus potential customers for those businesses. Toyota's
Scion brand appeals to car owners that want to customize their car versus just buying a off the slot clone, so this makes a lot of sense that Toyota would be interested in this market segment.