Brandon Cowan with his app, which today is the number one top grossing lifestyle app on the app store. 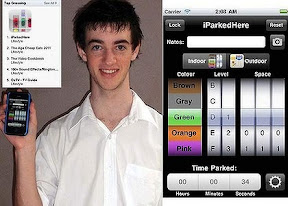 Brandon Cowan is in the middle of his HSC year but the budding software entrepreneur is already saving for a house as his company's first iPhone app takes off.

Cowan, 17, a student at Masada College in North Sydney, developed the simple iParkedHere iPhone app with family friend Hilton Rosenfeld. The app helps users remember exactly where they have parked their car and warns them when their time has run out.

In an interview, Cowan said his $2.49 iParkedHere app was the number one top grossing app in the Lifestyle category on the iTunes app store and ranked 31st today out of all apps on the Australian store. He would not reveal revenue figures.

"At the moment we are keeping the money in the company but I will probably be saving it for a house when i'm older," he said when asked what he had done with the money he'd earned so far.

Cowan said that through their company, Crazy Dog Apps, the pair last week signed an agreement with an "international gaming company" to develop an app for them. He couldn't reveal more due to a non-disclosure agreement.

They have also developed a basic prototype of an app to create shopping lists that they hope to sell to a supermarket chain.

"Last year I did a software design and development course for my HSC (I did this subject a year early so I can do one less HSC subject this year) and for a project, I created a web-based application," said Cowan, explaining how he got into software development.

"This was an online learners driving logbook that could be used by learner drivers to track their driving hours."

Cowan said his logbook concept placed him in the top 15 in a business studies competition comprising students from around NSW. He pitched it to the RTA and is hopeful the organisation will adopt his software.

"This got me into the technology field and gave me a taste of programming and the software development process," said Cowan.

Cowan said he knew he wanted to develop mobile apps as soon as he got an iPhone, and quickly came up with some concepts.

A professional software development company quoted him $70,000 for an initial fee and $50,000 a year to create and maintain an app. Cowan thought this was ridiculously expensive so he partnered with Hilton to make the apps himself.

Cowan's overnight success has led him to have second thoughts about going to university. "I'm not 100 per cent sure what I want to do after school but probably something to do with what I am doing now," he said.