iPad Has a Captured a Place Next the Heart of Doctors

Dr. Henry Feldman comes up close to the bed, taps on his iPad a few times, and tilts the panel toward his patient, Courtney Williams. On the screen are small pictures of something raw-looking and pink: the inside of Williams’s stomach, up close and magnified.

The previous day, Williams, a 27-year-old refrigeration technician, had walked into Beth Israel Deaconess Medical Center weak and dizzy, suffering from excruciating abdominal pain. He had a bleeding ulcer, so severe that he lost almost half his blood.

“That’s your actual ulcer right there,’’ Feldman shows him on a picture, “the thing that sort of looks like a volcano, and what’s underneath that is a blood vessel.’’

He taps on the screen again, and a picture from Frank Netter’s “Atlas of Human Anatomy’’ comes up, showing the stomach and the blood vessels that feed it. He points out exactly where Williams’s ulcer is — “a bunch’’ of ulcers, actually. 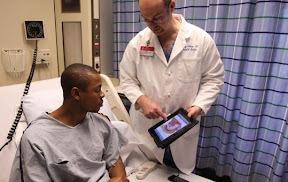 For some doctors, the iPad is claiming a key spot next to the stethoscope - Dr. Henry Feldman used an iPad to show endoscopy results to patient Courtney Williams. (Essdras M Suarez/ Globe Staff)

Another few taps and Williams’s medical record pops up, so they can discuss discharge instructions. Williams eagerly takes in the information. He’s been through hell, he said, and it’s very important to him to stay healthy now.

Last month, at the launch of the iPad 2, Apple showed a video in which Dr. John Halamka, chief information officer at Beth Israel Deaconess, said the iPad “will change the way doctors practice medicine.’’

It was a bold statement, and not the first lofty claim made about technology. But this much is clear: Hospitals across the United States and as far as Israel and Australia are embracing iPads.

The reason is simple, Halamka said in a phone interview — iPads are a great fit for doctors.

Technically, iPads weigh about 1.3 pounds, and the wipe-downs they get constantly at Beth Israel Deaconess are strictly against Apple’s directions.

But what makes iPads ideal, doctors at Beth Israel Deaconess said, is that they combine mobility — the ability to do substantive work at the bedside, in a stairwell, anywhere — with interactive touchscreens they can use to share pictures and data with patients.

Other devices available at the hospital — computers on wheels, static workstations, laptops, tablet computers — fall short in critical ways, said Feldman and Dr. Larry Nathanson, an emergency physician and fellow iPad evangelist. Size, weight, and battery life get in the way, they said, and nothing can be flipped around and used at the bedside like an iPad.

As soon as the iPad went on sale, the doctors got them and have been using them since, though in rather different ways.

Nathanson, in the emergency department, keeps the patient tracking system on his screen at all times, so he can keep informed without the constant interruptions of pages to update him. He enters orders and pages colleagues, and pulls up websites for patients on the fly.

Feldman, a hospitalist, has armed himself with educational resources. He used to hand-draw pictures for patients to explain, say, the digestive system; now he uses Netter’s “Atlas,’’ and flips back to X-rays, lab results, etc. to connect the pieces and answer questions.

“The number of times I’ve had patients say to me, ‘That is the first time I have understood my disease’ — I can’t even count,’’ he said. Sometime soon, he believes, “it will become the standard of care to show people this kind of stuff off a device.’’

Yet even at Beth Israel Deaconess, which Feldman said is optimized for mobile devices, with a robust network and Web-based patient records, iPad users are still a minority.

Almost all the iPads are owned by individual physicians, although for a study led by Nathanson, the emergency department bought four iPads to be shared by 15 doctors. More units may be bought for residents, and the hospital has licensed educational content ideal for iPad users, Halamka said.

At Children’s Hospital Boston, chief information officer Dr. Daniel Nigrin said there is already “substantial use’’ of iPads by individual doctors, but the hospital is only beginning to look at ways to use them more extensively in clinical settings.

Children’s has done more with iPads in research, most notably by Howard Shane, director of the hospital’s Center for Communication Enhancement, who advocates the use of iPads to enrich the lives of children with autism as well as other disorders, according to the hospital’s website.

Shane’s research has shown that autistic children are often drawn to touchscreen devices, and the same Apple video that featured Halamka also touted the iPad’s life-changing impact for some children. Shane and his team advise parents on how to use iPads, and they are evaluating existing applications and creating new ones to engage children and help them learn language, according to the website.

At Boston Medical Center, where several doctors already own iPads, network security upgrades had to be made first, but the hospital is launching a pilot study this week with about 20 clinicians, said Meg Aranow, vice president and chief information officer.

“My expectation is that it’s going to go very well,’’ she said, “and we’ll be rolling out more broadly.’’