Individuals Sold nearly 12,000 iPad 2 through eBay in 2 Weeks since the iPad 2 Introduction

Apple has yet to disclose any iPad 2 sales numbers and we won't expect any before the April 20th Q2 2011 Apple earnings call. While we wait, we can continue to gauge the iPad 2's success based on other factors. eBay has published some stats on how many of the new iPads have changed hands through their service. If eBay's numbers are any indication, Apple shareholders will continue to have a lot to smile about.

Just under 12,000 iPad 2s were sold in the two weeks between the introduction of the iPad in the US and the international launch last Friday. The surprising statistic was that many of those iPad 2s (65%) were sold within the US. At last year's launch of the original iPad, the majority of eBay purchasers were outside of the country (also 65%). 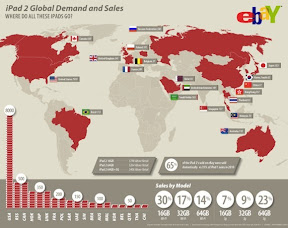 International purchases of the iPad 2 are mainly going to Canada, Russia, Hong Kong, Japan, and the UK. Last year's figures showed a large volume of 16 GB iPads heading to Russia, and Russian buyers also paid the highest average markup at a whopping $306 over retail for the 32 GB model.

eBay also started a helpful service for those who wanted to sell original iPads to help defray the cost of the new models. The eBay Instant Sale program provides a set price to iPad owners who don't want to go through the hassle of setting up and moderating an auction. eBay announced that they had made 38,000 Instant Sale offers on original iPads, with 22,000 of those made in the week after the iPad 2 was announced.

Apple has a few iPad 1's available at their online store. Maybe I can sell my on eBay for a higher price, especially after Apple runs out of stock of the iPad 1's.

More news that will continue to make Apple's 35th Year for the company, a very happy one for investors.