Almost three years ago we witnessed the concept of an iPhone integrated car, also called the Land Rover LRX, and recently someone stole the spotlight by integrating an iPad into car dashboard but all of that doesn’t just do enough, we want more insanity and here it is. 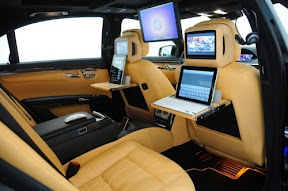 The iBusiness is the latest creation of Brabus, world’s most famous tuning company, based on the Mercedes-Benz S600 with a complete mobile iPad office built right within itself. 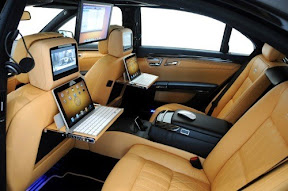 The Brabus iBusiness four-seater luxury sedan packs in a range of multimedia features, including two iPads in the rear seats with Bluetooth keyboards and mouse, an ultra-small Mac minicomputer under the rear shelf and a 64GB Apple iPod Touch. The German super tuners have fitted the Mercedes S600 iBusiness with a 15.2-inch TFT display with 16:9 aspect ratio and USB 2.0 ports in the rear compartment to hook up peripherals to the Mac. You can connect to the internet via UMTS and HSDPA. The two iPads control the complete Brabus multimedia system and the car’s standard S-Class command system with all functions such as radio, navigation system and telephone.

The interiors of the car are done in a two-tone combination of high-quality Brabus leather. The exterior comes clad in a sporty yet elegant designer suit. Brabus also offers to integrate this setup in any currently existing S-class.