I like Happy Owl Studio and I love their Wallet case for iPad - it is not your typical wallet nor your typical iPad case. My iPad 1 is carried inside the Happy Owl Wallet case daily along with my ID, credit cards, health insurance cards, and other cards including my monthly Smart Bus pass and cash. Access passes for my parking garage, work place and security gate at my residence, all fit snugly in my Happy Owl Studio wallet.

See my comparison video: The Wallet for iPad vs The Official Apple iPad Case

They also make an iPad case for women called the Clutch which offers the same features of the Wallet but with a pleated front, strap and prettier colors. They have recently reduced the price of their iPad 1 cases 50% to $39.99.

They are prepping for their iPad 2 lineup.

"Those of you who went through our iPad 1 case process with us last year already know something about this ;) But don't worry - we learned a lot last year! This year we can say with confidence that we will be delivering a product that is even better than our iPad 1 line... and yes, yes... Much sooner! We have expanded our offerings to include the new Shell line, which is the perfect compliment for Apple's Smart Cover. And of course we are coming back with our acclaimed Clutch and Wallet, redesigned to fit iPad 2 perfectly (with lots of little upgrades)."

I am sure the iPad 2 Wallet and Clutch will do good with the upgrades that include elastic on the phone and pen holders, reinforced D-rings for the straps, wider card slots, roomier pockets and support for "wake on open" and "Sleep on close" features.

They are even adding a new "Shell" line of cases that cover the back of the iPad 2 and work with the Apple Smart cover. I would imagine they would have to be able to match the colors exactly to the colors of the Smart Covers in order for these to do well.

I like to see new companies innovate and take advantage of the new trends. As much as I like the company and their products, I can't say the same about their choice for commercials: "I'm the Clutch" and "I have a Pocket".

The commercials feature two women: one representing "The Clutch" by Happy Owl Studio and the other representing the "iPad". It is a spoof of the Apple vs Microsoft commercials that Apple ran for years, but with a hug twist. The commercials begin with some dialogue highlighting the Clutch and then ends with both the women going to town of each others' lips in a crazy series of kisses. 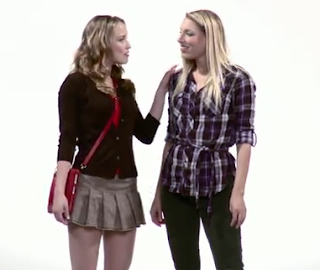 Now I am a man who admittedly can stomach some kissing by two hot babes on occasion, but I have to admit this was just wrong on so many levels. I know it is a matter of taste, but was the iPad woman even hot? I think they purposely made the Clutch hotter than the iPad. My brain and decency will overrule any lust and eventually I would have to look at this objectively. What is the point of it? Shock value appears to be the motive. Who is the intended audience? It looks like it appeals to young immature men. Are they the buyers of the Clutch? They assume after they do their business, them men will rush over and buy the Wallet case. Are they just trying to make a viral video so that it spreads across the Internet and bring attention to their brand? This appears to be the case. I think they were doing good without it. Did they go too far? Does this offend women? What are your thoughts?
By Carl W. Brooks - April 22, 2011