Recent analysis by Gartner shows the iPad dominating the tablet market past 2011 and into 2015, though it faces a tough opponent in the Android platform.

In 2011, Gartner predicts that 69 percent of tablets sold worldwide to consumers will be built on Apple's iOS platform. By 2015, the Apple tablets will still command a respectable 47 percent of the media tablet market, but Android will be catching up.

According to Gartner's estimates, tablets powered by Google's Android OS will become increasingly popular. While Android tablets will account for 20 percent of the global market in 2011, that figure will increase to 39 percent in 2015.

Take a look at the chart to see how MeeGo, WebOS, QNX and other competing platforms will fare next to Apple and Android tablets through 2015, according to Gartner.

How do you think Gartner's predictions will hold up? Weigh in on our quick poll (below). 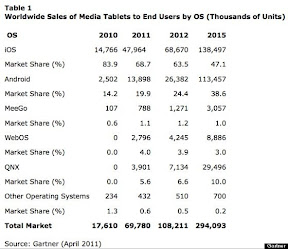