An armed security guard, hired by Apple to protect one of its San Diego stores, confronted and killed a smash and grab suspect in a gun battle early Monday, April 4, 2011.

One person is dead and two people have been taken into custody following the shooting at Otay Ranch Towne Center in the Eastlake section of Chula Vista according to police.

The Apple store manager was working inside when just before 7 a.m. the guard confronted two men and a woman. The suspects had smashed into the store's front doors, sending shattered glass out onto the sidewalk. 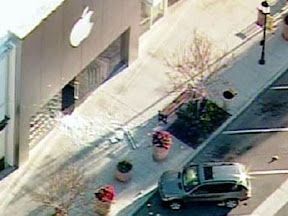 The guard told police a gun battle started when one suspect produced a handgun. More than a dozen yellow evidence markers were on the ground just outside the store's front door.

Investigators said the three suspects got into a silver Acura and crashed into a light pole and a post before stopping on the curb outside Banana Republic. The passenger side door was left open with what appeared to be a body still inside.

Police confirm the unidentified man was shot and killed by the security guard. The second man and woman ran from the mall heading east, police said.

Around 8 a.m., law enforcement officers with guns drawn approached a section of townhomes in the Winding Walk community east of the shopping center.

Officers entered an alley between two buildings and pulled out two people. A female was cuffed and walked to a patrol car. The second, a man, was originally cuffed and patted down. Then, he was treated by medical personnel for a gunshot wound in the buttocks before being taken by ambulance to a nearby hospital.

The suspects were positively identified by Apple store employees, according to Chula Vista police.

The Apple store security guard was not injured, police said.

Investigators said one of the suspects' two handguns was stolen. They're looking into whether the trio may have been involved in prior smash and grabs.

Mater Dei Catholic High School, first reported to be on lockdown, reported that it was back in session as well.