The other day I was browsing through the App Store on my iPad when I noticed something: both the top free and top paid applications for the device were apps for accessing Facebook. And as I kept going down the top apps lists, I kept seeing Facebook apps. In fact, of the top 40 apps (free and paid combined), a full 7 of them were ways to use Facebook on the iPad. 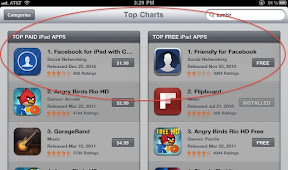 In other words, nearly 20 percent of the top apps being downloaded for the iPad are apps that allow you to use Facebook on the device. And not one of them is actually made by Facebook. Because they refuse to make their own iPad app for some seemingly illogical reason.

Facebook not having their own iPad app is strange for a few reasons. First of all, they’ve been making an iPhone app since day one of the App Store. And in fact, it’s the most downloaded app of all time in the App Store. And they regularly update it and use it to release new features that aren’t available on the site yet (like event check-ins recently).

So it’s not like they hate iOS. Nor do they hate native applications. They also make apps for Android, Windows Phone, and other devices.

And it’s very clear that there’s a huge demand for a native Facebook iPad app. See: the information up top.

What’s crazy is that Facebook is letting other developers not affiliated with the company own this space. That’s great for those developers, but it’s potentially bad for Facebook. Most of the apps that promise a “native” iPad Facebook experience are simply Facebook’s touch-optimized site wrapped in skins. And most of them are mediocre — not to mention very ugly. And many of them even charge customers for those experiences!

That’s the way thousands (if not millions) of users are experiencing Facebook on a daily basis. These developers effectively own the Facebook brand on the device. In fact, many of them use “Facebook” in the title of their apps, which just leads to further confusion that they may be official apps. (I wonder how many customers think they’re paying Facebook money for these apps?)

Facebook has come down on this type of brand-jacking in the past in the App Store. But it keeps happening because there is so much demand for a Facebook iPad app. A search for “Facebook” in the App Store on the iPad brings up 989 results. Some are simply apps that use Facebook Connect and have it in their descriptions, but many of them are apps designed solely to give users a native app Facebook experience. And many do subtle things to try and trick users into thinking that they’re official apps. 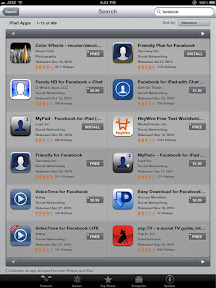 It has been over a year and Facebook still has not gotten out in front of this problem.

Contrast this with Twitter which is proactively trying to take control of their user experience across platforms by telling third-party developers not to focus on making new Twitter clients. Obviously, that has caused some controversy since Twitter has long thrived on such community-built clients. But it also makes sense: Twitter wants to control the way users experience their product. It’s just hard to believe that Facebook doesn’t.

Even though Facebook has indicated time and time again that they’re not too interested in building a native iPad app, there are no shortage of whispers that (at least) one such app has been in testing for quite some time. Facebook CTO Bret Taylor has indicated that the iPad was an unfortunate casualty in the way Facebook’s device teams were broken up until recently. At the same time, he would only commit to the company being at work on a better tablet-optimized experience — not necessarily a native application.

In fact, Taylor and Facebook have been talking up the HTML5 benefits in recent months, as opposed to native app development. On paper, that sounds great. But Facebook has to realize that native applications are still going to be far superior to anything done with HTML5 for at least a few years. Even Facebook employee (and the guy who built Facebook’s iPhone app) Joe Hewitt clearly understands this.

Facebook’s actual website works pretty well on the iPad in the Safari browser, but it lacks key features such as new message notifications when you’re away because it’s not native. And there’s no way to upload media. And it can’t access some of the powerful APIs that native apps can access. And Facebook’s single sign-on aspect won’t work without a native app.

Again, Facebook needs an iPad app. And if I had to bet on it, I’d bet that despite their stubbornness on the issue, we will eventually see one. Some are projecting Apple to sell upwards of 45 million iPads this year. Facebook simply cannot ignore that. Imagine Friendly or one of the other popular Facebook iPad apps making up a sizable chunk of visitors. I can’t see Facebook allowing that to continue happening.

Finally, with a native iPad app, Facebook can actually innovate in the space. Just like Twitter pushed new ideas forward with their iPad app (which pointed towards the work they would eventually unveil for New Twitter), Facebook can play around with new types of touch interfaces and interactions on the platform.

A Facebook-built iPad app would be the most popular app on the device without question. It would be installed on nearly every device out there. It’s time for Facebook to stop playing around and build the damn thing.