Best Buy is temporarily restricting sales of the Apple iPad 2 as it faces supply shortages and an "upcoming promotion." 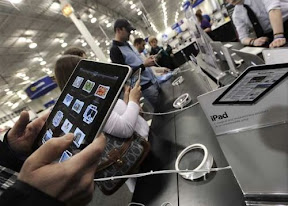 In response to reports that some customers seeking to buy an iPad had been turned away, Best Buy acknowledged Friday that its employees had been asked to hold on to iPad inventories not yet sold or reserved.

"This is a customary practice for us when there are supply constraints," the company said in a statement. "Best Buy enjoys a great partnership with Apple, and we're delighted by customer reponse to the iPad 2."

Besides attributing the move to an upcoming promotion, Best Buy did not go into further details.

The iPad 2 has been selling out in U.S. stores since it debuted last month, and supplies may dwindle even further after the earthquake and tsunami in Japan shut down factories manufacturing several key components of the tablet computer, according to a report from research firm IHS iSuppli.