For Best Buy, poking fun at the iPad in favor of a competing product probably wasn't the brightest idea.

Without explanation, the retailer removed an image from its promotional page for the Asus Eee Pad Transformer, which showed an iPad-like product and a keyboard duct taped together. "Like That," said the text above the iPad-keyboard concoction. "But Better." 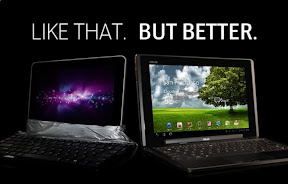 Now, the ad appears to be removed entirely. (Even the cached version has disappeared.)

Asus' Eee Pad Transformer is an Android 3.0 Honeycomb tablet with a 10.1-inch screen and an Nvidia Tegra 2 processor. It gets its name from an optional keyboard and touchpad dock, which clips to the tablet to form a laptop, with two USB ports and a 4-in-1 card reader. An extra battery in the laptop component boosts the Transformer from 9.5 hours to 16 hours on a charge.

Apple sells a keyboard dock for the original iPad that reportedly works with the iPad 2, but the company is not making a keyboard dock specifically for the new tablet, and does not promote the old dock among its list of iPad 2 accessories. The only alternative is to use another dock or stand, plus a wireless keyboard.

It's not clear whether Best Buy pulled the ad of its own volition or on Apple's request, but Apple has good reason to worry about the Transformer, and not just because of the clip-on keyboard. Product pages that temporarily appeared on Newegg and Best Buy suggested that the 16 GB model would sell for $399--$100 less than the iPad 2. The dock will sell for $149 according to the product pages, which have since been removed.

Still no word on when you'll be able to buy the Eee Pad Transformer in the United States, though it's already on sale in Taiwan.

Email ThisBlogThis!Share to TwitterShare to FacebookShare to Pinterest
Labels: iPad