Samsung is infringing patents related to the way the Galaxy devices operate, including the use of hand gestures on the screen, as well as patents on the color and rectangular shape of the iPhone and iPad, Apple said in a complaint filed April 15 in federal court in Oakland, California. The Galaxy phones and tablet, which use Google Inc. (GOOG)’s Android software, were specifically designed to copy Apple products, Apple said.

The lawsuit pits the two largest makers of tablet computers against each other amid the surge in demand for the product, which Apple has said will eventually surpass personal computers in sales. Steve Jobs, Chief Executive Officer of Apple, which relies on Samsung to supply chips for the iPhone and iPad, called out Samsung when unveiling the iPad 2 in March, saying that the company was among the tablet makers angling to make 2011 the “Year of Copycats.” 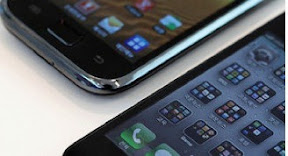 A Samsung Electronics Co. Galaxy S smartphone, top, and an Apple Inc. iPhone 4 are arranged for a photograph at an electronics store in Seoul, South Korea, on Tuesday, April 19, 2011.

“What’s of concern is that you can see the strategic relationship between Samsung and Apple getting worse of late,” said Kim Young Chan, an analyst at Shinhan Investment Corp. “As Samsung pushes ahead with its handset and tablet business, Apple is trying to keep Samsung in check.” 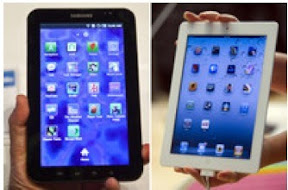 “It’s no coincidence that Samsung’s latest products look a lot like the iPhone and iPad, from the shape of the hardware to the user interface and even the packaging,” he said. “This kind of blatant copying is wrong, and we need to protect Apple’s intellectual property when companies steal our ideas.”

Samsung shares dropped 0.7 percent to 861,000 won at 12:44 p.m. in Seoul trading, poised for a fourth consecutive day of decline. The shares have tumbled 9.4 percent this year compared with a 2.9 percent gain for Apple on the Nasdaq Stock Market.

Apple and Google are competing for supremacy in the growing market for smartphones and tablets. Google’s Android operating system -- used by Samsung, Motorola Mobility Holdings Inc. and other companies -- will account for 39.5 percent of global smartphone shipments this year, compared with 15.7 percent for Apple, according to market research firm IDC.

The iPad dominates the tablet market, accounting for about two-thirds of sales this year, according to Gartner Inc.

Apple claims Samsung is infringing seven patents related to the way the devices understand user gestures, including selecting, scrolling, pinching and zooming, according to the complaint, and three patents on the design, including the flat black face of the iPhone and iPad.

Samsung also is accused of copying the on-screen icons, as well as trademarks for certain icons, including green boxes with phones or a sunflower for photos. Apple also claims the packaging is copied.

Apple is seeking a court order to block further use of its patents and trademarks, along with cash compensation and “reasonable funds for future corrective advertising.”

The case is the latest legal dispute between technology companies over the growing market for smartphones. Apple is involved in a patent fight with Motorola Mobility Holdings, as is Microsoft Corp.

Apple lawyers are also arguing before a federal trade panel in Washington that another Android user, HTC Corp. (2498), is infringing other patents.