The iPad Tablet Makes a Fantastic Learning Tool for Students

"And as a former kindergarten teacher, I know I can speak for most others - we are even most impressed when children come to school with more interaction with books than computers". 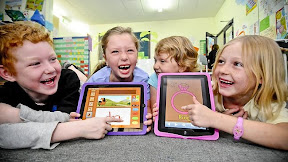 Good the thing the iPad is an ebook reader too, LOL. The tablet will male a fantastic tool for our current and future students. It is the first piece of technology that makes sense for students, teachers and administrators. We have to not just throw technology at the children, but really think about the technology and where we can properly apply it. We also have to realistic on what we hold on too.

Think about it, we still teach cursive in school, but I am not sure it is still relevant. When was the last time, we used it besides possibly for our signatures? Will the touch type be the new cursive? The though of it is extreme - let the flaming begin. Whether we like it or not, the tablet computer will no doubt be a tool for the new kids. A single tablet can store all the books they will need from k-12, though college. Backpacks are no longer require, nor the Chiropractors' bills.

It can provide lessons as both audio and video. Papers can be sent and returned via the Internet. Imagine being able to not only recall your lessons from grade four, but to be able to see the actual textbook, lesson plans, and graded papers. Sure in a perfect world, that would be the scenario - reality dictates that greed will only allow a more controlled and restricted version of this possibility. 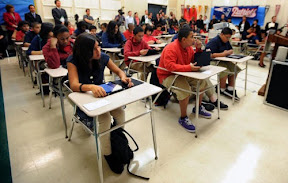 Biology 101, there's an app for that! Imagine, not just books available, but entire classes as an app. Interactive instructional content delivered to the students' tablets as needed. Bonus material and even extra study material can be purchased as in-app purchases. These apps will make opportunities more accessible, but it will still require initiative, money and commitment to the goal by the students and their family to ensure the student excels and rises to the top of the heap. Do students get a iTunes card for the year to purchase the books or do school give Promo codes for books? These things will be discussed and decided.

The camera come in handy as well, teachers can have more impromptu and frequent parent and teacher FaceTime conference. Parents that can't easily make the meetings in person now have some FaceTime with the teacher. What about GPS? Parents could keep tabs on their children's whereabouts. I know privacy advocates will frown on this, but it is not their children. Proper protections will have to be in place. Privacy, ownership of the device and data access from school personnel are just a few of the issues that will need to be addressed first. People are already looking to make this technology work in schools. Reed College recently published a report about this subject, here is an exe rcpt:

After extensive student interviews throughout the Fall 2010 semester, “The bottom line feeling was that the Amazon Kindle DX was not adequate for use in a higher education curricular setting,” Chief Technology Officer Martin Ringle tells Fast Company. “The bottom line for the iPad was exactly the opposite.”

The most impressive iPad feature was also the simplest: a smooth scrolling touchscreen. “The quick response time of the touch screen was highly praised and seemed to be extremely beneficial in class discussions because it allowed students to navigate rapidly between texts to reach specific passages,” notes the report.

Add the smooth scrolling touch screen to the growing list of positives for the iPad:
By Carl Brooks - March 31, 2011