World of Goo on the iPad is Addictive and Fun 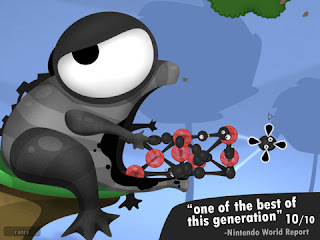 Normally when you put Goo on the iPad, you would grab a microfiber cloth to wipe it off. But when you put World of Goo

on your iPad, the wiping won't happen for some quite some time later. That's because World of Goo is a new game for the iPad that will keep you captivated for hours.

The object of the game is to build a tower of goo to reach a pipe. A minimum numbers of goo must be sucked into the pipe in order to advance. It sounds simple, but it can be quite a challenge at time. Either way it is a lot of fun.

This game utilizes the iPad very well and is fun for all ages. It has quickly become one of the games that I play to kill time here and there. Sometimes you won't know what's going on in this goo-filled world, but there are messages left behind by the Sign Painter, whose philosophical commentaries blend together with surreal out-of-game observations.

World of Goo's concept is very similar to the old school game of Lemmings; the early '90s sensation that involved guiding suicidal green-haired characters through levels loaded with hazards. The objective here is rather similar, although instead of guiding lemmings to an exit in each level, you're leading globs of goo across similarly dangerous terrain to pipes that suck them up. This rather odd task is accomplished by selecting the cute, gibberish-spouting blobs and turning them into nodules in framework buildings that reach for the sky and stretch across yawning pits like sticky scaffolding. When your wobbly structure is close enough to the level exit pipe, all of the goo balls that haven't been used as makeshift building blocks then roll over their former buddies to freedom.

Balloons are sometimes used to help suspend the goo structures over obstacle like windmills, caverns and gears. This physics-based puzzler is one of the most innovative and addictive games to launch on the iPad. Independent developer 2D Boy has done a great job at porting his World of Goo from the concole and PC platforms

This simple building game paired with the easy of use of the iPad's multi-touch screen, makes for an addictive and fun game.