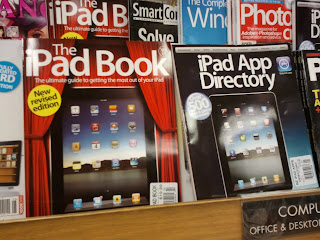 Since the iPad has caught on, many companies have been trying to work it out with Apple to get subscription services for their emagazine or magazine apps. The iPad has also been deemed the "paper media killer".

Despite these hurdles (real or imagined), some folk are still making magazines. I even found a couple of real paper magazines that focus on the iPad.

The iPad Book and iPad App Directory magazines were spotted today at my local mall.

I found these at Borders.

The iPad Book magazine boasts that they are the "Ultimate guide to getting the most out of your iPad".

The iPad App Directory magazine boasted that they had "Over 500 iPad apps and games reviewed".

Both magazines were asking $19.99, which seemed pretty steep for a magazine.
I'll check them out more and comment on content at a later date.