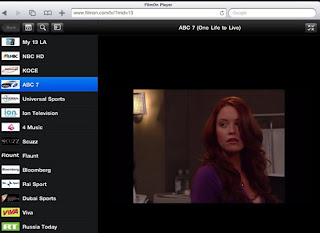 Interested in watching broadcast television for free on your iPad? Just point your Safari browser to http:\\www.filmon.com site, pick a network affiliate and enjoy. I'm watching Law and Order on my iPod Touch as I type this on my iPad.

FilmOn is streaming broadcasts of several network affiliates in the Los Angeles area, including those of NBC, CBS, ABC, and Fox, in an effort to entice users to purchase subscriptions to their service. The basic package costs $9.95 per month, while a premium package that includes movie channels and pay-per-view movies costs $24.95 per month.

The quality of the stream is very good; however, results may vary based on your Internet speed. As you may expect, there are commercials to view and you can't skip any of the commercials in the programming. When viewing Filmon.com on any device other than an iPad, the streamed selections are limited to only the four major broadcast networks. I was able to view these four networks without any problems on my generation one iPod Touch.

FilmOn is the brain spawn of U.K. financier Alki David.  "Our platform is designed to be easily customized for broadcasters and advertisers that wish to get into the online broadcast business quickly and with minimal expense," David said in a statement. "FilmOn is currently in negotiations with all major cable providers and plans to provide complete syndicated cable television services throughout the U.S. in 2011."

If you're wondering how the networks feel about all this, well, they're not very happy with FilmOn; nor are they excited about ivi TV, which streams live broadcasts from network affiliates in Seattle and New York to desktop devices (ivi does not stream to iOS devices).

The Big Four networks and their associated studios have filed suit against online video streamer FilmOn in a New York District Court, saying its conduct has caused, and is causing them, "irreparable harm."

The effort follows on the heels of many of the same parties -- plus others -- to block streaming site ivi TV from doing essentially the same thing, which is streaming local TV stations signals, as part of an online pay package, without having negotiated retransmission-consent payments with the stations.

The broadcasters and studios say the company does not have the right to stream the stations or the underlying copyrighted content and has asked the court for a declaratory judgment that that is the case, as well as a preliminary injunction against the conduct.

FilmOn has been streaming the stations since Sept. 27, according to that company, and Friday was planning to launch HD versions.

As with their arguments against ivi TV, the plaintiffs allege that the timing of the launch was to coincide with the beginning of the fall season, thereby "misappropriating some of the most important copyrighted content at a critical time of the year."

In an interview with Multichannel News last week, David said that he has not negotiated individual carriage deals with the broadcasters, though for some other content he does have deals.
He argued that his service fits the definition of cable system when it comes to the statutory license to retransmit broadcast signals over the air per U.S. Copyright law, but that it is not a cable system when it comes to the Communications Act requirement to obtain express permission from a station before such retransmission.

He said he saw the site as a business-to-business aid to broadcast and cable programmers, but was not shying away from a fight. "If somebody wants a fight, bring it on," he said.

On my Jailbroken iPad the device, I could only view a few minutes of Filmon before my iPad would reboot; however, it streamed flawlessly on my iPod Touch.

The networks are fighting these efforts today; however, they will find that broadcasting has changed and will continue of the next few months and years.  The viewing habits of today's and future content viewers are rapidly changing and the old way of broadcasting in following in the footsteps of newspapers (catering to the past and those who are still holding on to it).

The future of content delivery is not blind broadcasting on a fixed schedule created by programming managers and studio executives, but content availability providers that make the content available to an audience that can pick and choose their content and the time that they want to view said material. Filmon, ivi, Netflix, Google TV and Apple TV are just the beginning of the change.