Chillingo Ltd has an exciting game available for the iPad called Cut the Rope HD.  The concept is simple: cut the rope to allow the candy to float, fall or fly into the monster's mouth. Sounds simple, but the challenge arrises as you shoot for the stars and try to avoid the obstacles. 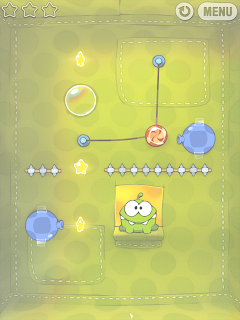 Once the creature has had his share of candy and you have completed all the levels for the creature, the creature leaves and is replaced with another creature in a different type of box. Each box contains a creature with a huge appetite for candy.  Feeding the creature becomes increasing difficult as the candy is swung from rope, pushed with air, floated in bubbles and maneuvered around blades to reach the creatures mouths.

Each board is represented by a box.  You begin with a cardboard box, then a fabric box, a tin foil box and finally a gift box.  Each box or board has several levels.  These not only have obstacles to endure, but also require precise timing to successfully land the candy in the mouth of the creatures.  Points are rewarded for reaching the goals as well as doing so in a timely manner.

Each level have three stars that can collected.  Levels can be completed without collecting each star, but a certain number of stars are required to unlock certain parts of the game, so they are important to your advancement.  You can switch between any of the obtained boxes; however, you need 190 stars to play the gift box board.  If you finish a level without obtaining all stars, you may replay the level to attempt to do better.

Cut the Rope HD has the Crystal Services integrated to allow you to track high scores, achievements and interact with your social networks. 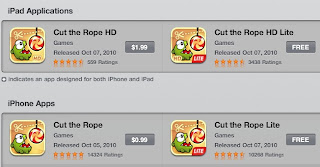 Pros:
Family friendly; fun for all ages
Challenging, but allow advancement without mastering each level
Bright and well done graphics and sound
Great use of physics
Achievement sharing with friends or the world
Lite version available for demo play

Cons:
No multiple users profiles
Not an Universal app

This game is a great and is sure to become a staple entertainment app for all iPad owners.

I give this game "5 Swipes" of the finger.

Chillingo is an international marketer, publisher and distributor of video games and lifestyle applications. Originally a publisher of mobile games for Windows Mobile, RIM BlackBerry, Symbian and J2ME games, Chillingo was one of the first to publish on the iPhone platform. In a short period of time, Chillingo had become one of the world's largest publishers on this platform. Currently, Chillingo's most successful products are new IPs including iDracula - Undead Awakening, Ravensword: The Fallen King, Minigore, Touch KO, Toki Tori and Defender Chronicles, games based on popular movie licenses such as Ice Age: Dawn Of The Dinosaurs and games from long-running franchises like Jules Verne's Mysterious Island. Chillingo will launch its first pipeline of games on the Sony PSP Mini and Nintendo's DSiWare and WiiWare platforms in 2010.