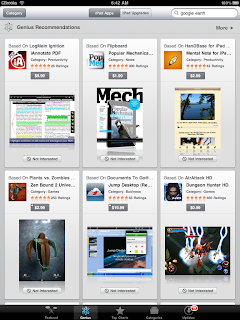 For those of you with an Apple iPad, you might have noticed that on Friday, Apple [AAPL] added the Genius option to the menu on the App Store.

To access Genius you simply tap on the icon. Once done, you are presented with similar apps based on apps you already have installed. The list goes on for a number of pages depending on how many apps you already have installed. To let Apple know what you do and don't like you can just tap the not interested button under each app for it to be taken out of the recommendation list.

The good thing about Genius on the iPad is that it helps you to find apps that you might not have found through a regular search. When looking on the app store it is often the case where you grab the apps that are most popular or are in the top 50 or so. Given that there are 100,000's of apps, it's next to impossible to find some hidden gems that just haven't had the fortunate chance of being made popular. The bad thing about the iPad Genius is that he made take a while to actually suggest the proper alternative apps for the chosen installed app.

What are your thoughts on Genius on the iPad? Have you found any new apps through it?