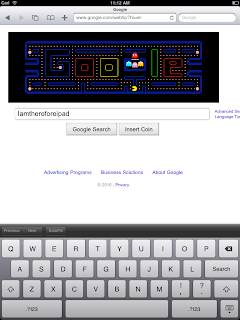 A playable ... logo? That's exactly what web giant Google has today, in celebration of the 30th anniversary of Pac-Man's Japanese release. The doodle (Google's term for its event and holiday-specific logos) is accessible on its main page and is a full 255-level game complete with a 256th level "kill screen," just like the original coin-op.

The interactive doodle -- a first for Google -- is the brainchild of senior user experience designer Marcin Wichary, whose earliest exposure to Pac-Man came at age five while traveling across his native Poland with his father, a game technician, to repair arcade machines. Wichary worked with Google's Ryan Germick to create the finished design.

Surf over to google on your iPad and play some Pac-man!