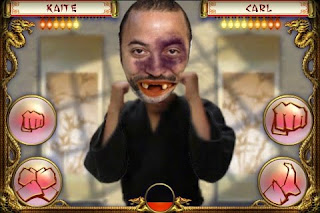 If it has a Face, you can Fight it!
The picture is me during one of my fights. This game is hilarious.
Listen to what the critics are saying about FaceFighter:

"The most I’ve ever laughed during an iPhone game. Period. This game was a hit with every single person I showed it too, who all had an equally joyous response ... 4/5/5 stars" -- Matt Dunn, iPhone Games Network

“FaceFighter reminds me of early versions of Mortal Kombat … The secrets are surprising and killer to watch. Children of all ages will enjoy this (mine did).” -- 148Apps

“The action is hot and heavy, with lots of crazy sound effects. Your chosen target will start to grow black eyes, fat lips, and band-aids as you wail on them. And if you fill up your special attack meter, you get to beat them with a monkey wrench for a few seconds. Good times!”
-- Slide To Play

“… I suspect FaceFighter could be a useful tool in picking up girls at the bar.” -- iPhone Game of the Day

“... Next time that a**hat in the office p**ses you off, ask to take a picture with them. They’ll never know what hit them.” -- The Bachelor Guy

FaceFighter is the fighting game where YOUR FRIENDS are your foes!

FaceFighter bouts are as simple as a three-punch boxing combo:

If it has a face, you can fight it ... friends, pets, even cartoon characters can be your boxing opponents. Give your foe black eyes, a busted nose, and swollen lips, and laugh at their expressions and reactions as you beat the crap out of them. But be careful -- your FaceFighter opponent is a cagey boxer who will be trying to do the same thing to YOU!

Designed by the creator of the legendary Ready-2-Rumble Boxing franchise, FaceFighter is so simple that anyone can pick it up and play, but deep enough to reward skillful tactics as you learn to unleash devastating combos. With FaceFighter, easy button controls let you pummel your opponent with fists and feet like a Kung Fu Master, or kick butt with crazy weapons like wrenches.

If you liked Smack Boxing but wanted more personality, or you enjoyed Punk Justice but wanted smoother game play, or if you thought Iron Fist Boxing was awesome but wanted a bit more kung fu ... then FaceFighter is for you! If Celebrity Deathmatch was your favorite show, then you need to get this game!

Be a master martial artist like Bruce Lee. Experience action and adventure when you enter the ring to assassinate your foes. Make your friends laugh by snapping their pictures and showing them off as FaceFighter opponents. From Appy Entertainment -- FaceFighter is fast, frantic fun everyone!
By Carl Brooks - April 19, 2010