It is no secret that people buy gadgets for other people. Buying Apple iPads for others; however, has resulted in some bizarre situations. First there was Bill Jordan, a Colorado man, who lost two-thirds of a pinky finger when a thief yanked a bag, carrying a newly purchased iPad he had just purchased for a friend, from his hand. 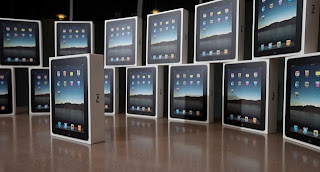 Now enter, Andy Cheng who learned that buying more than the "2 per customer" rule for Apple's new iPad can lose you the right to by anymore iPads - for life.
"Since my nearby Apple store initially had plenty of stock, I offered to purchase and ship iPads internationally for members of the NeoGAF gaming forum. "

"So as the pick-up requests came in, I went on multiple visits to the Apple store, buying no more than 2 per day since I had heard there was a limit per person. I found this whole situation pretty funny considering I had never bought an Apple product prior to this madness..."

"But the store recently went completely out of stock. I had one last order to fulfill so an employee helped me place a reservation. A few days passed and yesterday I was sent an email notifying that my reserved iPad had come in.."

"I walk into the store today and ask somebody where I can pick up my iPad reservation. He notes my name and says he’ll be back, going behind closed doors to the stockroom."

"The employee emerges a few minutes later with the iPad and I hand over my credit card. If you’ve never been to an Apple store before, instead of checking customers out at a register, the employees use hand-held credit card terminals to ring up purchases. Adds to the hip factor, I suppose."

"But instead of using his handheld device, he walks to the back of the store where the “Genius Bar” is. Naught a word spoken. There are registers here but this area is used mainly for technical support. I follow the guy there. He still hasn’t said anything to me. He gives my credit card to one of the staff there and says, “I want you to help me ring up this purchase.”"

"...He’s still staring at his monitor and a few seconds pass before Guy #2 carefully says, “There is a limit to the number of iPads that customers can buy.”

Me (anticipating that statement) — “Is the iPad limit per person? Per credit card? Per household?”


Guy #1 — “All I can say is that you have reached your lifetime limit.”

Me — “What does that mean? Can I use a different credit card to buy it? I’m buying this for a friend.”

Me — “Uhh… is it ok if I have a family member or friend come to buy it for me? My reservation doesn’t expire until 6:00 PM.”

Guy #1 — “All I can say is that you have reached your lifetime limit.”

Me (suddenly realizing what he’s saying) — “Wait, what? Lifetime? What does that mean?”

Guy #1 — “All I can say is that you have reached your lifetime limit of iPads and will not be allowed to buy any more.”

Me — “I’m banned from buying iPads? I know there’s a shortage right now, but I can’t buy any more once there’s plenty of stock?”

Guy #1 — “All I can say is that you have reached your lifetime limit.”

I pause and look at him with incredulity undoubtedly written all over my face. Everybody tells me I have the worst poker face. Hey asshole, nice job with the passive aggressiveness, but who do you think you’re talking to? I’m from Los Angeles; nobody does passive-aggressive like we do!

Me — “Ok buddy, I’m not going to make a scene so I’m leaving. How many iPads is the limit by the way?”

Guy #1 — “That information is not available.”

Me (looking at Guy #2, who has been silent this whole time) — “He tells me that the limit is two.”

Me — “I’ve already purchased more than 2 iPads. Why didn’t anybody else stop me in the past?”


"Five diehard Apple fans in countries around the world are now very happy and spreading the iPad love to friends and co-workers, who would not have seen the iPad in person for a month at the very minimum. A couple of them have requested that I buy a few more iPads for their friends. I had to decline because… well, Apple banned me."